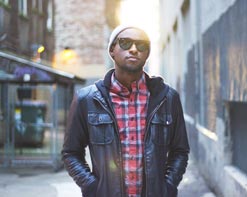 JPRiZM is a fresh name on the Boston music scene, blasting onto it with his debut album Mindwalker.  Check it out and you’ll hear cool jams from a man whose head is crammed full of ideas, someone who casually breaks through genre boundaries.  But it’s not as if the artist who was born Jared Price has just arrived, either.  Before he decided to leap in front of a mic and become JPRiZM – to write lyrics, sing, rap and perform – the teenaged Price recorded and released instrumental music under the names Ravage Panda, Johnny Foresight and Knobbs.  His current (and permanent) name JPRiZM?  “That moniker came out because I have such a vast appreciation for different music genres,” he says. “And also my name is Jared Price, JP, JPRiZM.” As he posts on his Facebook page: “Prisms look different every time you look at them. Always changing. Depends on which way the light is hitting it at the time. With me, on any given day, I might be into EDM, hip hop, indie pop or trip hop.”

His early musical influences were not well-known artists, per se, but the accompanying music on Sonic and Sega Genesis games. “A strange non-conventional place,” he says, with a soft laugh. “The music playing in the background while I was jamming out with the joysticks really motivated me to want to make my own music. That’s when I feel the most alive, when I’m jamming out to some spacey sounds.”   As JP got older, he says, “I started to appreciate music, like as a student. The groups I had listened to for lyrics were A Tribe Called Quest and de la Soul. Also for the rhythmic melodies that they had, and the different beats. It was fresh to me, new ideas.”

On Mindwalker he writes songs about exploration, about nature, about the search for love. And songs with science fiction themes and tall tales with those aforementioned comic book heroes. He’s not singing or rapping about gold chains, drug-dealer dreams and babes with big booties. For the new single “Vigil N Tea” he drapes himself in the persona of a late night crime fighter. The video is an ode to the masked men and women who keep our streets safe at night. The video makes references to a whole cast of characters from both DC and Marvel rosters including Batman, Iron Man, the Hulk, Captain America and many more as he patrols the night, cleaning up the mean streets. Juxtaposed with his daily life as a mild mannered office worker, JPRiZM really takes us on a wild ride to dish out true vigilante justice. All in a night’s work for JPRiZM before he retreats back to his own cave, his true identity unknown to the world.

We are incredibly pleased to be working with JPRiZM on this spectacular new video! We are enamored with this up and coming artist and would love to get you on this train as well! Please hit us up if there is anything we can do on our end to get this video into your programming! For more information please contact Andy Gesner and the HIP VIdeo Promo crew at (732)-613-1779 or email us at info@HIPVideoPromo.com for more info. You can also visit www.JPRiZM.com/.