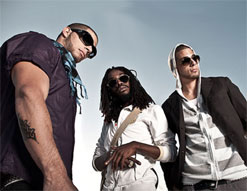 Greetings , its Andy Gesner and the HIP Video Promo staff, here to share a clip with manifest international appeal. Young Jamaican vocalist Jr. Pinchers was born into stardom: his father, Pinchers, is recognized as one of the most important dancehall artists of the Eighties and Nineties. Pinchers Sr.’s scalding Mass Out is a landmark fusion of American swagger and Caribbean heat — and we’re pleased to report that the son has picked up right where the father left off. In the islands, Jr. Pinchers is already well-known: he scored his first hit single at the age of fourteen. That was over a decade ago, and he hasn’t stopped since. He’s worked with Sly & Robbie, Chris Meredith, Squiddly Cole, and other ragga luminaries, recorded in Jamaica’s top studios, and rocked dancehalls all over the Caribbean. The only thing he hasn’t done is land a record on mainstream U.S. radio — and American producers Twinz Beatz are out to change that.

“Back Broke”, the first collaboration between Jr. Pinchers vs. Twinz Beatz, sounds like this year’s answer to Enur’s “Calabria” — a warm, irresistible island wave that engulfs the mainland. With production that incorporates elements of Reggae, stateside R&B, roughneck hip-hop, and classic house, “Back Broke” would fit in equally well in an urban commercial radio set as it would in a Jamaican dancehall. The two members of Twinz Beatz demonstrate their versatility, their playfulness, and their mastery of club music: they spike the track with a saxophone whine, color it with stuttering synths and slowed-down backing vocals, and drive it with a relentless beat. Jr. Pinchers is a huge presence on the microphone, broadcasting desire, lust, and excitement, and putting all the sexy women in the dancehall on notice. His emceeing is throaty, percussive, and urgent; he rides the house beat with an assurance worthy of his legendary father.

The talented vocalist isn’t camera-shy, either. He’s the undisputed star of the flashy “Back Broke” clip, rapping toward the lens with visible authority. In his leather jacket and Lil Jon shades — with his long dreadlocks tied loosely behind his back — he looks every bit the part of the international Reggae star. Not to be outdone by their vocalist, Twinz Beatz dress sharply, too; in the club, the two producers look on in bemusement as Jr. Pinchers works the floor. And this party is absolutely off the hook: the record spins, the neon colors glow in the dark, and the girls gyrate with enthusiasm. Directors Juan Munoz and Jaime Dussan keep things jumping, but they’re not afraid to add arty touches here and there — as the camera circles around Jr. Pinchers, an electronic effect “zaps” and warps the footage, and a sexy dancer appears where the rapper once stood. By the end of the video, the girls are moving so frenetically that they’re actually in physical danger (and the paramedics are contacted!) The artists have their legal disclaimer ready: “Jr. Pinchers vs. Twinz Beats”, you have been warned, “are not responsible for any females breaking, dislocating, rupturing, or injuring themselves while dancing to ‘Back Broke'”.

We’re very excited to be working with the good folks at SloppiShizzle Records. They’ve hooked us up with everything you may need for Jr. Pinchers vs. Twinz Beatz, so please be in touch if you’d like to get your hands on anything! If you need more info, call Andy Gesner at 732-613-1779 or e- mail us at info@HIPVideoPromo.com . You can also visit www.JrPinchers.com to find out more about Jr. Pinchers and Twinz Beatz.