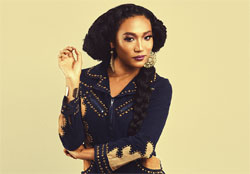 Imagine an artist talented enough to trade verses with Michael Jackson, endearing enough to share stages with John Legend, elemental enough to convince Prince to produce her debut album, competitive enough to clean up on The Voice, and photogenic enough to be a subject of a beloved movie. Sounds too good to be true, right?  It’s not. It’s Judith Hill we’re talking about – a brilliant musician, songwriter, and singer who has spent her adult life among pop royalty. Some of the greatest musical artists of the last forty years have recognized Hill as one of their own. It’s only a matter of time before the rest of the world follows suit.

Michael Jackson appreciated her enough to select her as his main duet partner for This Is It, and Prince – an astute judge of talent – oversaw the creation of Back In Time, her effortlessly funky and emotionally effulgent 2015 set, and continued to work with her up until the end of his life. Documentarian Morgan Neville told her tale, along with the stories of other support singers, in the Academy Award-winning 20 Feet From Stardom. Indeed, she’s been inches away from the hottest spotlights in show business for years.

The scalding “The Pepper Club” ought to close the gap further. This is a fierce slice of funk-pop – mesmerizing enough to be a lost sixties classic, but sufficiently modern to climb the charts in 2018. The track showcases everything that recommended Judith Hill to her famous mentors: her electrifying delivery, her impeccable sense of rhythm, her inimitable voice, and the playfulness of her pen, too. She’s paired her track with a clip that underscores its sense of fun and its compulsive danceability – a four-minute shindig you won’t want to leave.

Video director Jon Jon Augustavo specializes in transforming mundane surroundings into otherworldly scenes: the acclaimed Los Angeles filmmaker was behind the camera for the clip that turned Macklemore’s “Thrift Shop” into a carnival, and he was the mischief-maker who made over Schoolboy Q’s home into a funhouse in the clip for “Hell Of A Night”. For “The Pepper Club”, he’s back at it, converting a truck-stop gas station, diner, and motel into a playground for a team of joyous performers. His camera joins the choreography, too – the lens swirls around Judith Hill and her collaborators with the same deftness as the dancers demonstrate as they move around the floor.

Hill says that choreographer Misha Gabriel – who’s worked with legends like Justin Timberlake and Janet Jackson, among others – “played an integral part in making this video magical.” She’d previously worked with Gabriel during the This Is It era; him and his assistant Devin Jamieson were Michael Jackson’s dancers, making “The Pepper Club” a reunion of sorts. The dance routines are wonderfully synchronized, but each of the patrons at the diner has a distinct personality that he or she expresses during short featured sequences, as they each play specific characters. Urban dance pioneer Bradley Rapier plays Mr. Tibbs; So You Think You Can Dance? Season 14 winner Lex Ishimoto plays Charlie; Ishimoto’s girlfriend (and fellow SYTYCD contestant), Taylor Sieve, plays Charity; well-known choreographer Tessandra Chavez plays Georgia Mae; Travis Wolfe Jr., an incredible new talent, plays Penny; and the cast is rounded out by the stunning Melany Centeno playing Josephina. Just like Judith Hill, they’re all distinct individuals, talented and unique, and making the most of their moments in the spotlight.

“The Pepper Club” is a stunning clip in its own right, and also serves as a sneak peak / trailer into Judith Hill’s new musical, Golden Child, which she describes as “a live concert / modern ballet that celebrates diversity and the coming together of many cultures.” It’s a true pleasure to work with an artist with as much talent and tenacity as Judith Hill. We’re certain that you and your viewers will embrace the “The Pepper Club” music video as wholeheartedly as we have. Rest assured we’ll have plenty of outstanding Judith Hill merch to set up online/on-air contests and giveaways throughout the campaign so don’t be bashful about reaching out to get your hands on some.For more info on Judith Hill please contact Andy Gesner and the HIP Video Promo team at (732)-613-1779 or email us at info@HIPVideoPromo.com. You can also visit  www.Facebook.com/JudithHillOfficial for more information on Judith Hill.