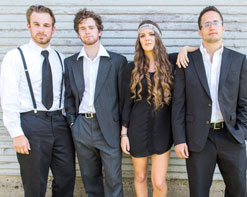 Julia Kahn Music is an Indianapolis-based band that cranks out catchy, bluesy, pop songs laced with Julia’s edgy, heartfelt vocals. Balancing an often crazy schedule of being full-time students, gigging, and recording, the band still makes time to collaborate and write on a consistent basis. This tight-knit crew – Danny Steinmetz (Bass/Guitar), Vinny Corsaro (Guitar/Keys), Zane Turi (Drums) and Julia Kahn (Vocals) – have all performed together since high school and it shows in their bond on stage and off. In the brand new video for “Alice,” their cohesive mindset culminates in the most glorious of fashions.

They’ve made big waves in the Indianapolis scene, and are now ready to go international. With the new EP Closet Symphonium and single “Alice,” they’ve delivered a dynamic vision that incorporates key elements of folk, rock, and pop and make it their own. Of course, there’s a long list of artists claiming the same thing, so we believe the best thing to do is let the music video do the talking.

“Alice” is a video chock full of fascinating mystery, clearly inspired by the story of a familiar trip to Wonderland. With Julia and the band providing the captivating soundtrack, the video follows a modern-day Alice as she transforms from a modest artist in the countryside into an explorer of an imaginary land of characters reinterpreted from the classic fairy tale. The video is draped heavily in vintage wardrobe, and director John Moon delivers a fascinating, Americana-inspired vision that does perfect justice to the sounds of Julia Kahn Music.

It’s our great pleasure to introduce Julia Kahn Music and the fiendishly fantastic “Alice” video to programmers far and wide. Huge thanks to the Blonde Entertainment team for giving us everything we need to get this video into your music video programming. Please contact Andy Gesner and the HIP Video Promo at (732)-613-1779 or email at info@HIPVideoPromo.com. You can also visit www.BlondeEntertainment.com for more info on Julia Kahn Music.