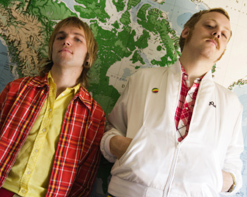 Greetings and salutations music video programmers nationwide! It’s Andy Gesner and the staff from HIP Video Promo, back with another winning clip from an indie act who’ve already established themselves as international hitmakers. Think it might be tough for a band from Denmark to win worldwide recognition for their music? Not when they lead with a video as share-worthy – and undeniable – as the one for “Move Your Feet”. Junior Senior matched the single from D-D-Don’t Stop The Beat with a clip so clever that it became virtually iconic during 2004 and 2005. The “Move Your Feet” spot featured pixilated characters resembling those generated by an old 8-bit Atari machine, and set them loose in a landscape of bright computerized color and primitive cartridge-game effects. It was nostalgic, sure, but it also felt wonderfully current, and it perfectly matched Junior Senior’s delirious mix of indie rock, throwback rap, electro, and retro-disco. The clip found its way into VH1 promos and onto Dance Dance Revolution – and the hard drives of countless downloaders all over the globe.

The song proved every bit as popular as the video clip, and quickly made Junior Senior one of the best-loved acts in contemporary dance music. D-D-Don’t Stop The Beat charted in thirteen countries, topped many year-end best-of polls, and the San Francisco Chronicle even named it the “best song ever”. Subsequent singles from D-D-Don’t Stop The Beat made the soundtracks for Looney Tunes and Queer Eye For The Straight Guy, and the album reached the UK Top Thirty – not bad for a resolutely indie-pop release! Hey Hey My My Yo Yo, Junior Senior’s much-anticipated follow-up, will arrive on these shores in August; it’s already made waves in Europe and Asia, charting high on both continents and spawning more hipster dance-floor staples.

The clip for “Can I Get Get Get” – the centerpiece of Hey Hey My My Yo Yo – is all about saying thanks. The song itself is an ecstatic come-on that’s more neighborly than lascivious, and it’s so damn friendly that it seems to demand a response. Recognizing this, Junior Senior posted a solicitation to their website, asking fans to send in their own homemade karaoke-style video footage. Thousands responded, and Junior and Senior have compiled the very best and released it as the official video for “Can I Get Get Get”.

If there was any lingering doubt about the international appeal of Junior Senior, this clip ought to dispel it: here are fans dancing in front of Big Ben, the New York City skyline, the Hollywood sign, Nordic houses, the Australian desert, and landmarks in Japan as well. The young volunteers sing with an enthusiasm that can’t be faked; they dodge around the camera, inhabiting every line of the song. Junior (Jesper Mortensen) and Senior (Jeppe Laursen) appear themselves, but they don’t hog the screen-time – they are, the clip seems to suggest, just another pair of dance music enthusiasts, as enthralled by the beat as any of their listeners.

We’re very pleased indeed to be on board for a band and video truly worthy of the buzz, and many thanks are due to Billy Fields at Rykodisc for bringing us on board to champion Junior Senior! As always, we’ll be ready to meet your Junior Senior CD giveaway needs, as well as your video interview requests when they band is here in August, so please be in touch if we can help set you up. If you need more info, call Andy Gesner at 732-613-1779 or e-mail us at info@hipvideopromo.com.