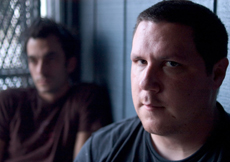 Warm weather is here, and warm greetings to everyone in the music video community! It’s Andy Gesner and the staff from HIP Video Promo with another artist who is completely worthy of your undivided attention. Over the past eight years, songwriter and rocker Damien Jurado has shown himself to be a skilled practitioner of traditional American musical styles: folk-rock, punk, indie, brutal acoustic blues. As a literate writer of short-stories in song, he’s got few peers; he’s shown himself to be a balladeer with an ear for heartland sounds and rhythms, and the discerning eye for humane detail of Raymond Carver. His songs glow with authenticity and genuine emotion, and his narrative ballads are hypnotic and engrossing. Jurado’s characters are often shattered, but they’re also frequently coping as best as they can with disappointment; he’s a poet intimately familiar with the crossroads of the soul. His sympathetic portraits of resilience in the face of despair have won Jurado a place among the very best independent songwriters working in America today.

This Seattle native first came to the attention of indie music fans by playing in several prominent mid-Nineties northwest punk bands including one he shared with Pedro The Lion principal David Bazan. He allowed that punk energy to inform his early solo work, though he has, with a few notable exceptions, kept his records low-key and skeletal. The spare, radiant Rehearsals For Departure showed that Jurado could craft an acoustic folk-ballad with the unerring skill of the traditionalist, and the noisier, plugged-in I Break Chairs rocked with brittle assurance, inventiveness, and nervous energy. Throughout his career, Jurado has matched his tales with music that perfectly reflects their quiet intensity and subtle, occasionally disturbing, undercurrents.

On My Way To Absence trades in a familiar melancholy, but in some ways, its the brightest and friendliest album Jurado has ever made. That’s not to say he’s gone soft, but there is undeniable warmth and poppiness to the sound that owes as much to AM gold as it does to blues and punk. “Lion Tamer”, an angelic folk-rock song, floats by on a lovely melody, delicately-played acoustic guitar, distant piano and warbling synthesizer, and Jurado’s deep, sonorous vocals. It’s so rich, lovely, and inviting that it might take you a few spins to realize that its a kiss-off delivered by an emotionally remote lover. Yet there’s a core of irreducible hopefulness at the heart of the song, too: Jurado trades in these ambiguities and contradictions, and makes their stakes palpable for his listeners.

The video for “Lion Tamer” opens with a shot of rippling water just as the song ebbs toward the listener on a wash of acoustic instruments. We’re shown the sun glinting off eddies and gentle crests of a lake. There are human figures in the frame, too; one is probably a man, and another is almost certainly a woman. But director Ryer Banta has flooded the scene with so much white light that it is difficult to ascertain exactly what the people are doing, or what their relationship might be.

Shots of the lake are superimposed over the washed-out human figures, and as the background fades to bright white, the gauzy foreground takes on the character of moving water. The human silhouettes lose their features, and instead appear as an amalgam of moving ripples and sparkling lighting effects. As the sun peers between branches and dances across the running water, the subjects of the video appear to have been assembled out of stars.

We’re absolutely thrilled to be working with Secretly Canadian to bring you this unique and compelling video. We’ve got a supply of the Damien Jurado CDs on hand for any on-air giveaways. If you need more info call Andy Gesner at 732-613-1779, or email info@HIPVideoPromo.com. You can also visit www.secretlycanadian.com or www.damienjurado.com to find out more about this artist.