Justin James "Tell Me You Love Me" 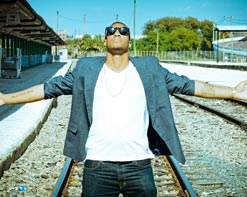 Justin James was born in the wintry month of January on the 16th day. Who would have thought such a talent would come from Cape Cod, Massachusetts! Proving that talent knows know zip code, he found himself singing at the age of six. He quickly gravitated to popular self-made artists like Keith Sweat and icons Michael Jackson and R. Kelly. “These were singers that my father would play around the house when I was growing up” says James. Today we are proud to present to you the new video for “Tell Me You Love Me.”

He began to explore rap because of the opportunity to be creative and vocal. James felt that “…there were so many things I could do with the rap that I couldn’t do with singing”. At that age, finding acceptance of the ladies wasn’t enough. James wanted to gain the approval by putting his purpose in his music and having audiences respond to it.

In the same year, Losing his older brother to a car accident, and then his father to kidney failure found him spiraling into a life of crime. It was the birth of his daughter that found him with a new purpose. Her mother removed him from her life by moving her to Brazil when she was barely six months old. Finding himself alone, without his brother, father and daughter, this time he turned back to music. It became his therapy. Through music, he could express himself, release his aggression, and once again find the acceptance he long for. He re-purposed his negative energy, into what is now the start of a promising career. One he hopes will reunite him with his daughter.

His debut single “Tell Me You Love Me” is a song that is a complex mix of the joys of love and adulation as well as the despair that comes along when said love is unreciprocated. In the video, Justin finds himself falling head over heels with a beautiful young lady. They say love is blind, but it’s also true that love can make you blind to realities amongst us, and that can lead to some irrational and extreme decisions. His love and devotion is so deep that his emotions get the best of him and his insecurities come out in an ugly and misguided way. Upon realizing the gravity of his error, Justin is despondent and is at the end of his rope. At the moment of truth, we are left with the ultimate cliffhanger…

Here at HIP we’re very excited to be working with such an up and coming talent such as Justin James and are here to do anything we might do to help get this video into your programming. Please contact Andy Gesner and the HIP Video Promo at (732)-613-1779 or email us at  info@HIPVideoPromo.com . You can also visit www.ThinkJustinJames.com for more info on Justin James.