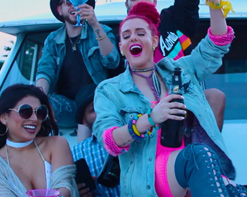 As Garden State natives ourselves, we’re undeniably partial to artists who call New Jersey home. Needless to say, we’re absolutely thrilled to be partnering with Justina Valentine once again! She released the aptly named Scarlet Letter in 2016, which has given us some stellar visuals already, like those for “All The Way” (feat. Futuristic) and “Candy Land” (feat. Fetty Wap). Now, this red-haired vixen is coming at us with “Sunlight.”

From Nick Cannon’s Wild ‘N Out to international tours with the likes of Mike Stud and Futuristic to airplay on major radio stations, Justina never stops creating, performing, grinding and getting her music out there. In the age of social media, no one understands the importance of a strong visual – and an active online presence- better than she does.

In her brand new video for “Sunlight”, Justina Valentine is entirely in her element. The video shows black and white clips of her biggest fans and screaming crowds from her Scarlet Letter Tour, the only color being glimpses of red to match her hair. When she’s not having fun on stage, she’s the life of the party on the beach or on the deck of a yacht. She pops a bottle of champagne and shows off her best moves, embracing the “live in the moment” mantra as she sings, “We gonna party till the sunlight / Cuz you only get one life.”

From start to finish, “Sunlight” shows Justina Valentine surrounded by her fans and friends- the people who believe in her the most. It’s a feel-good clip with a party vibe that’s sure to be the soundtrack to your summer. Joan Roman directed the video, and Justina’s fans are already loving it, leaving YouTube comments like “It’s straight fire.”

As always, it’s a pleasure to be working with Justina Valentine to promote yet another incredible video. Justina Valentine will be joining Chris Webby for the upcoming Weirdo Tour in August, which will include a show in Teaneck, New Jersey at Mexicali Live on August 4. Please contact Andy Gesner and the HIP Video Promo crew at (732)-613-1779 or email us at info@HIPVideoPromo.com.

For info about other Justina Valentine music videos, click HERE