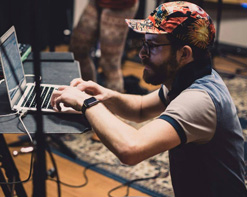 Ben Runyan is the face of the one-man musical experience, J U S T P R O C E S S. Already a veteran of the indie music scene, Runyan’s previous brainchild, 2-piece pop group City Rain, saw critical acclaim for their single, “The Optimist”, winning MTVU’s Freshman contest, putting the music video in regular rotation in 2014. Teaming up with MTV a second time, the song was also featured on reality TV show Catfish as well as other shows on Esquire TV, Showtime and G4TV channels. A nomination for ASCAP’s Sammy Cahn award for best lyrics along with a string of commercial and short film deals proved to be the cherry on top of the wild ride with City Rain. With all this newly found success under his belt, Runyan created J U S T P R O C E S S, his new alias with which he aims to develop artists through the vessel of slick electronic pop.

The brand new J U S T P R O C E S S single, “I Already Know” featuring Joannie Jimenez is an entrancing electronic symphony, patiently revolving eclectic electronic instrumentation around the sweet & sour vocal track. Jimenez opens the tune with a looming tease of the hook, repeating a drowned out melody to strap us in for the ride. As soon as we have something to hold onto, the song transitions into a lustful first verse, bringing the dynamic down to its bare bones. Layering percussion and keys brick by brick, Runyan builds momentum until we reach a head in the second verse where Jimenez brazenly delivers her hardest lines of the song over a lush breakdown. A sure-fire dance-hall favorite, the duo have struck gold their awe-inspiring debut together.

Directed by Stephen Rutterford, the deep visual experience created as the music video for “I Already Know” is a black and white visual masterpiece. The mind-bending imagery sets the stage as a “Casablanca-era” classic turned on its head. The video opens with a glimpse into the windows to the soul of actress, Jace Moody. In the deep darkness of her eyes lies an image of her distress, thinking of her former love coming back into her life. She dances through the video, fighting her way through the thoughts of their past together. Finding herself in different places in time, she just can’t shake the thought of being with him again, and as soon as he comes into frame she already knows that they’re meant to be.