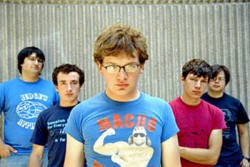 Hi, my friends and fellow music lovers, it’s Andy Gesner and the staff from HIP Video Promo. They’re named after the only actor to play Jason in the Friday The Thirteenth movies more than once. Their biography references Brit-metal absurdists Manowar. Their debut album for Fueled By Ramen has songs called “Jason Dean Was A Teen Liberator”, “Too Much Eddie Kendricks, Not Enough David Ruffin”, and “Crushing Everything In Sight”. Yes, Kane Hodder is an angry, sarcastic, and bitter band. But there’s nothing arch or supercilious about this act – they’re down in the trenches of the culture war, hands dirty and rifles hot, blazing away at gluttony, superficiality, and the dross of the modern experience. They’re also totally unclassifiable: musical shapeshifters with one eye on the mosh pit and the other on modern rock radio. It is safe to say you won’t hear or see anything like Kane Hodder this year, and we at HIP Video Promo are excited to be working with FBR to bring their music to your attention.

Kane Hodder is a heavy band, but one with a difference. They play with great ferocity, but they’re rarely content with straightforward punk or hard rock. Instead, the brisk songs have vertiginous twists and turns, riffs are rough and angular, and sweet melodies combust suddenly into horrific shrieks. Adding to the controlled chaos is the supple, acrobatic rhythm section – pushing the songs into bizarre directions, stopping on a dime, slamming on the accelerator for bracing rides to the finish line. There are moments of surprising sensitivity here, too. But just as soon as Kane Hodder has gotten you comfortable, they’re likely to blow you away with a torrent of ferocious six-string. In their commitment to composite, their skill at mimicry, and their ability to flit seamlessly back and forth between genres, they’re reminiscent of Mike Patton-era Faith No More: smart, emotional ironists with bloodied faces.

“I Think Patrick Swayze Is Sexy”, the lead single from The Pleasure To Remain So Heartless, is a textbook example of the ever surprising group’s ability to jam an album’s worth of ideas into a single song. The track begins with a brittle new wave groove, morphs into pop-punk, suddenly stops for a hand-clap chant, returns with some heavy metal stomp, and ends in an intricate section that’s very nearly prog. Remarkably, none of the transitions are jarring: they all seem naturally implied by the direction and emotional trajectory of the song. Still, the lead vocal is nothing short of astounding, switching back and forth from an r&b falsetto to a plaintive emo wail to a guttural speed-metal roar – sometimes within the course of a single line!

The “Patrick Swayze” clip finds the band performing before a sparse group of jaded hipsters – exactly the sort of audience most likely to be confused by Kane Hodder’s music. Disaffected, they lounge in their seats, watching the band with blasé expressions. One black-clad youth reads a music magazine article (about Kane Hodder!), two androgens make out in the front row, others hide behind their big sunglasses. Unable to countenance this imaginative failure – or perhaps just looking to cause mischief – singer Andy gets directly in the faces of the hipsters, screaming his lyrics at them. They squirm uncomfortably in their seats, but they haven’t the wherewithal or initiative to leave or fight back.

When director Shane Drake pans his camera back, we’re no longer confronted by this culture clash. Instead, we’re at a typical Kane Hodder concert. Here, the crowd doesn’t need prompting to sing along – they’re all on their feet, shouting the lyrics back at the band. As Andy leads the audience in the chanted refrain, the camera swings wildly across the stage; the musicians, playing now with full ferocity, hit their marks with assurance.

We’re absolutely thrilled to be working with John Janick and his impeccable team at Fueled By Ramen to bring you this incredible video. We’ll have discs for giveaways, and the band is on the road and available for video interviews or IDs. If you need more info call Andy Gesner at 732-613-1779, or email info@HIPVideoPromo.com. You can also visit www.FueledByRamen.com  to find out more about Kane Hodder.