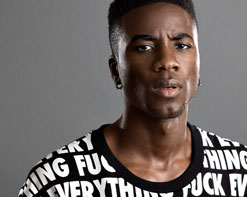 Former X Factor contestant Karim knows his audience. Videos of himself singing in the shower on a weekly basis have reached millions of young girls online. Under the moniker “Team Karim” he has accumulated over 100,000+ subscribers on both Instagram and Facebook. Karim went on to compete in the X Factor USA receiving a unanimous “yes” from judges Simon Cowell, Kelly Rowland, and Demi Lovato. Today, we’re very excited to bring you Karim’s debut original music video, “My Bae” which not only showcases his silvery voice, but also his talent as a gifted songwriter with a knack for producing and recording incredibly catchy pop-R&B music.

This same army of young girls have followed Karim in his post-X Factor career with a relentless enthusiasm. A simple click over to Karim’s Facebook page reveals a constant stream of heart-eyed emojis and praise from girls in the USA and as far as West Africa, where Karim is originally from. Fortunately for them, the release of his first mixtape Never Love Again is right around the corner.

The lead single and music video “My Bae” is seeping with sexuality and a titillating sense of romance. Karim sets the music video within a dream where his “bae” is free to embrace and touch him as she pleases. Standing front in center in a SoHo loft draped in all white, Karim seduces the camera with his voice. He sings passionately about his main chick as she is shown deep in a dream in bed. Based on her curled toes and restlessness, we can certainly deduce that this is a lucid dream, and one that she’s likely thought quite a bit about. She jolts up in bed, but the look in her eyes makes it apparent that this is one dream she will want to make a reality.

It’s a very exciting opportunity for us to have the chance to work with Karim and to bring you his new “My Bae” video. We would love to help get this video into your programming, so please don’t hesitate to get in touch to let us know what we can do to make that happen. Please contact Andy Gesner and the HIP Video Promo crew at (732)-613-1779 or email us at info@HIPVideoPromo.com.