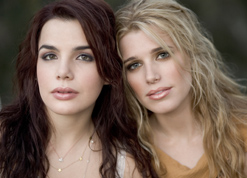 Greetings music video lovers nationwide! It’s Andy Gesner and the staff from HIP Video Promo, here with a defiantly romantic clip from a pair of talented siblings from Los Angeles. The Rudisill family is staggeringly talented, and the members pick up their instruments young: sisters Kelly and Kamille have been singing, performing, and learning about music since they were in single-digits. What’s more, they’ve been dedicated to training – they’ve been educated at the San Francisco Conservatory and the Thornton School of Music at USC. Despite placing songs in episodes of The Hills, NCIS, and several other high-profile network television shows, the sisters chose to complete their degrees; after graduation, a major record contract quickly followed. Armed with formidable musical knowledge, self-assurance, and a suitable moniker (not only does Karmina mean “song” in Latin, but it’s also the middle name of their precocious kid sister), Kelly and Kamille are determined to tackle the entertainment industry – their way.

Backwards Into Beauty isn’t their initial foray into the mainstream – they’ve performed on the most recent CBS-TV holiday special – but it is the first complete musical statement from Karmina. It’s a suite of wildly romantic, beautifully-sung, and passionate-performed pop-rock; it’s also refreshingly literate. Lead single “The Kiss” borrows lines (and its premise) from Romeo & Juliet; elsewhere on Backwards Into Beauty, the sisters sing convincingly and articulately about love lost, anguish, sympathy, and forgiveness. Penned by Kelly and Kamille, respectively, “Gone With The Wind” and “Stay” are aching chronicles of relationship troubles; “Free” is a power ballad worthy of Michelle Branch at her most thoughtful. The band can rock, too – kickoff track “Satellites,” co-written with little sister Petra Karmina Rudisill, packs surprising punch. Throughout, the two young singers harmonize as only siblings can; their vocal arrangements are ambitious, impeccably-recorded, and joyous to hear.

The Rudisill sisters’ talents extend beyond performance – they co-produced Backwards Into Beauty with a Karmina bandmember, and Kelly’s empathetic snapshot photography is featured in the CD’s liner notes. It’s also their concept that animates the inspiring video for “The Kiss.” Directed by Anastasia & Ian – a team well-known in Los Angeles for their memorable clip for Norah Jones’s “Don’t Know Why” – the Karmina video takes the Romeo & Juliet reference to its logical conclusion. As the Rudisills sing of forbidden and transcendent love, actual couples who have faced cultural discrimination are shown onscreen. (The excellent Karmina website features the back-stories of these pairs; the sisters have also made their “behind the scenes” footage available on YouTube.) Anastasia & Ian label these lovers with the obstacles they’ve overcome: we’re told they’ve been “misunderstood,” “questioned,” even “disowned.” The star-crossed lovers story is persistent and resonant on its own, but it’s also notable that in their brief screen-time, these couples manage to make their passion and commitment feel genuine and profound. Like the Rudisills’ music, their sincerity and faith is more than just heartwarming: it’s transformative.

We want to extend much appreciation to Audrey Faine and the folks at CBS Records for having us on board as a part of the Karmina team. They’ve been kind enough to hook us up with plenty of copies of Backwards Into Beauty for all of your on-air giveaway needs so please don’t hesitate to be in touch if you’d like to get your hands on some. If you need more info, call Andy Gesner at 732-613-1779 or e-mail us at info@HIPVideoPromo.com . You can also visit www.Karmina.com to find out more about Karmina.