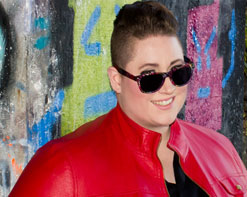 Growing up in a military family can come with its share of challenges. Having to pick up and move every couple of years can’t be easy, especially during your formative years. However this unique upbringing can also be profoundly rewarding. Experiencing cultures other than your own is a guaranteed ticket to broadening your sense of self, your perspective on the world at large and where you fit within it. Such is the case for singer, songwriter and producer Kayla Jay. The well-traveled, multi-faceted musician currently calls New Jersey home but has lived everywhere from North Carolina and Maryland to places as far-reaching as Spain – each playing playing a key role in who Kayla Jay, the artist, is today. Her head-turning blend of Pop and R&B is currently capturing the attention of larger and larger audiences with each passing week and for good reason. With incomparable passion and charisma and an all-in dedication to her art, this promising new artist is poised to make a major dent in the music industry in 2016 and the brand new music video for her powerful single, “I Don’t Care” is proof in the pudding.

In today’s wildly oversaturated musical landscape we’re constantly being inundated with cookie-cutter musicians who put about as much emphasis on their skinny waists and perfectly manicured looks as they do their music. Eh, who are we kidding? More often than not it’s ALL about image – and/or twerking. Ugh. This has been a somewhat troubling trend for far too long and it could easily be argued that we’ve had enough. Luckily for all of us, Kayla Jay is proudly throwing the first mighty punch in defiance. In her appropriately titled single “I Don’t Care” Kayla sings about the very fact that she’s entirely aware of how things are and she, quite frankly, couldn’t care less. Nor should she. The exciting new artist is proud of the fact that she”s not part of the “one size fits all” dreck that’s so prevalent within the industry and she’s speaking up about it. Truth be told… the status quo a bore – and it’s time to diversify!

Directed by duo Aliem Jumpp and JD Dominguez, the compelling music video tells the story of Kayla as she deals with some of the aforementioned push back first hand. It follows her as she shows up for a photo shoot only to be utterly turned off by the photographer who’s attempting to mold her into something that she’s not and she’s having none of it. She quickly has enough and bails on the whole thing only to be texted and pleaded with to come back, as they’re fully aware of the talent that she possesses and the job they just lost. She sings: “Can’t be anything I’m not/And you can’t either so/Just let them talk”. Understandably, like any of us, she sometimes has to deal with her own self doubt, her own inner monologue telling her to conform –  but at the end of the day that’s just not how she rolls, and it’s completely refreshing. Kayla’s a genuine role model. But what’s perhaps most important and noteworthy is the song itself. Kayla’s signature, sizzling-hot production chops paired with her ultra smooth, soulful singing voice make her an absolute must-hear artist and it’s all on full display in “I Don’t Care.”

The appeal of Kayla Jay’s music is obvious and we’re beyond proud to be part of her promotional team. For more information on this up-and-coming new artist, please contact Andy Gesner and the HIP Video Promo staff at (732)-613-1779 or email us at info@HIPVideoPromo.com .