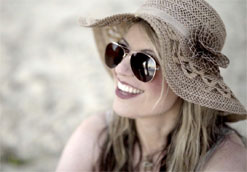 New York singer-songwriter Kelly Padrick refuses to take a break. We brought you her videos for “Tangled Forest” and “Radiance”, and she’s now topping these dark videos with a much happier and lighter feel with her new video for “Heavenly Ride.” Bringing in bible and fairy tale references, she pulls inspiration from some of the greatest works of literature. Unafraid of toying with dark themes, she also has an immense light side that balances out all her multiple faces. Kelly’s goal and the driving force behind her art is to speak to as many people as possible to make them smile through her music. She has an energy about her that radiates confidence, making her effortlessly sexy and a sensational performer.

Originally from Rhode Island, she started writing songs at the early age of five. She decided to move to New York City as soon as possible to start her work in the music business. She has always had a strong presence in the independent scene by performing and collaborating with various producers. Kelly has partnered with songwriter Nancy Hess since 2006 and has scored some major spots along the way. Her song “Pizza & Fairytales” was featured in Fox Searchlight’s movie Trust The Man. In 2010 “Ties That Bind” and “The Brooklyn Hours” were featured prominently in ABC’s promos for Desperate Housewives. Her EP Fires was recently added to Pandora Radio, another huge milestone. With a strong discography to her name (Kelly has released seven full-length albums and four EPs!), it’s no wonder she landed these placements. Her 2014 release Radiance shows how much she has grown as an artist as she calls out for her past lovers while welcoming new flames.

Produced by the Canadian production company Flirt Films, the music video for Kelly’s recent single, “Heavenly Ride”, highlights all her best qualities and caters to her girl-next-door image with a twist. Teaming up with director Patricia Chica once again, the video opens up with a classic car ride down the countryside. Filmed in California, the song gives off a summer feel. It shows Kelly and her boyfriend being cheeky as they try to get to their mobile home vacation destination. In complete solitude their love grows stronger as they almost have a Bonnie and Clyde feel to their energy. The trip comes to a halt when they get a flat tire, but Kelly laughs in the face of disaster as she kisses her reckless lover. It’s her careless sexiness that carries this 60s Californian surf vibe.

Here at HIP, it’s a thrill to be working with the classy Kelly Padrick once again. We hope you enjoyed the clip for “Heavenly Ride” and add it to your cherished programming! Up next will be a video shoot for “Waiting For This”, and we anticipate a busy and exciting year for Kelly Padrick. Rest assured we’ll have plenty of Kelly Padrick merch available to set up online / on-air contests and giveaways throughout the campaign so please don’t hesitate to get in touch. Please feel free to contact Andy Gesner and the HIP Video Promo team at (732)-613-1779 or email us at info@HIPVideoPromo.com. You can also check out www.instagram.com/KellyPadrick and www.Twitter.com/KellyPadrick for recent updates on Kelly Padrick and head to www.KellyPadrick.com for more info.

For info about other Kelly Padrick videos, click HERE