Kentish Fire “In Our Band” 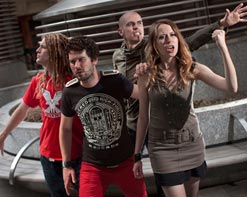 Kentish Fire above all else, is a band that likes to keep a tongue in cheek. That’s not to say that this four piece synth-pop act from London doesn’t take what they do very seriously. From the endlessly buzzing, energetically charged performances they deliver on stage, to the artful arrangement of every melody carried by overdriven staccato synths, pumped-up bass lines and heaving stop-start rhythms, this is a band who pours a painstaking amount of work into making sure their indie dance anthems will keep you hooked.

Yet central to their work is the unfailing ability to poke fun at their own endeavours, if not the music industry as a whole. With their new video for “In Our Band”, filmed with a revolutionary 360° camera, they present “eccentric, parody-filled, offering of synth-pop goodness” in the words of Gigslutz. The song covers the story of a group of musicians who have been forced to resign themselves to performing as a cover band to make ends meet. Their dreams of success are dashed as they find themselves regurgitating generic cover songs and taking requests. The song, led by lead singer Michael, is taken over by bassist Anna as she names a long list of cover songs, strung together with an irreverently cheeky rap delivery.

This story is captured with a Ladybug camera – the same 360° camera used to create the Google Street View mapping tool. The material captured by this camera can be displayed in a variety of ways but is typically used for its immersive 360 navigational ability. Kentish Fire were interested in the effect of displaying the footage as an unwrapped panorama. The resulting image is strangely hypnotic, where the background seems to be constantly unfolding whilst the band remain locked in the foreground. The musicians appear to perform a single seamless take as the locations behind them change with almost every cut, showcasing a view of London that is both unique & strangely puzzling.

The video was funded by a successful Kickstarter campaign which ended up exceeded its target, demonstrating the level of passion this synth-pop foursome inspire from their dedicated followers. With this pioneering and mesmerising new video to accompany the addictive slice of pure synth-pop that is their new single, Kentish Fire are about to find themselves with a whole new army of devoted recruits.

For more information please contact Andy Gesner and the HIP Video Promo staff at (732)-613-1779 or email us at info@HIPVideoPromo.com . You can also visit www.Facebook.com/KentishFire/ for more info on Kentish Fire.