Kevin Tiah “Fight For You” 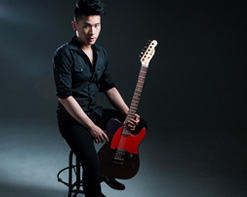 To try to pin down Sydney, Australia’s Kevin Tiah would be a futile exercise. A glance through his Facebook page and the initial guess might be that he’s a diehard metalhead with his leather vest, electric guitars in his cover photo, and the various shots he’s shared of him shredding.

Dig a little deeper, however, and you’ll find a very versatile musician who is striving to push himself to his own limits of songwriting by diversifying himself into several different music genres. He has also invited his fans to be a part of that process. He posts recording sessions in progress, shares videos of his experimentation into a wide variety of genres, and encourages feedback on all fronts.

He gained his most substantial experiences as the lead vocalist and guitarist of a post-hardcore/screamo band, performing at some of Sydney’s most prominent venues like The Metro, Factory Theatre and Oxford Art Factory. For his first official music video release as a solo artist, Kevin turned back the clock to a pop ballad that he began writing in high school but never completed. With his newfound sense of experimentation, Kevin has brought “Fight For You” back to life with a gorgeous new music video. In his own words, Kevin describes the video: “Cherish every moment with your loved ones and don’t wait for it to become a memory before you realize how valuable it was to you” Quite a mature message for an artist still in his formative years.

The “Fight For You” music video dives into the various stages (or struggles) of modern romantic relationships, whereby people are becoming too obsessed with their work-life and careers, which also leads to the overuse of smartphones/smart devices. This cycle creates neglect of those who are important to us, and leads to the breakdown of relationships. The storyboard was inspired by observing the culture of modern-day relationships and aspects from real-life experiences.

In the clip, the camera quietly follows Kevin and his beautiful significant other through the days and nights of their relationship. Over time, Kevin’s lack work-life balance and inability to be present in precious moments create an obstacle in his connection with her, which leads to the breakdown of the relationship. Upon realising what an important part of his life he has just lost, he quickly acknowledges his own faults and making sure she knows that despite his own missteps and flaws, he’ll never stop pulling out all of the stops to win her heart back. The video then ends with a quick flashback of his vision of her and a final shot and an empty theatre, which will leave the audience with some suspense – Was there ever a reconciliation at the end or was it just in his imagination?

We’re very excited to have the chance to work with an artist as eclectic and talented as Kevin Tiah and are eager to see his “Fight For You” in upcoming programming. We would love to do anything we can to make that happen, so please don’t hesitate to get in touch with Andy Gesner and the HIP Video Promo staff at (732)-613-1779 or email us at info@HIPVideoPromo.com. You can also visit www.Facebook.com/KevinTiahMusic for more info on Kevin Tiah.