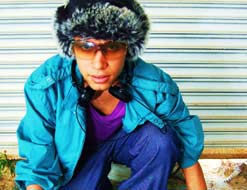 Label:
KHALIDRIVERAMUSIC
Video:
“WHO DO U LOVE”
Director:
Anthony Fletcher
Add Date:
May 12, 2010

Howdy cherished programmers! It’s Andy Gesner and the HIP Video Promo staff, here with a brand new clip from a talented performer making the transition from stage attraction to music video star. We’ve said it many times: it doesn’t take a hefty budget to make a seriously trippy video. The latest independent upstart to prove it? Khalid Rivera, whose clip for “Who Do U Love” is awash in flashing lights, throbbing speakers, and mesmerizing dance moves. The “special effect” in the clip is so straightforward that it very nearly defies description — the nimble Rivera moves to the beat in front of a bank of hot white circles that expand and contract in size. The shifting curves make the dancer’s liquid-mercury choreography seem all the more otherworldly.

Such is Rivera’s comfort in front of the camera that you’d swear he’d done this many times before — and indeed he has. His clip for the sparkling “Salvation” made the LOGO Network’s list of the top videos of 2009. The channel’s viewers loved his spot for the soulful “Every Night”, too: that video made LOGO’s Click List two years in a row. That said, the swaggering “Who Do U Love” is his best work yet, and it seems poised to win Rivera an audience far beyond the New York dance clubs where his music is a regular presence.

A Gothamite for life (he’s sung the national anthem at several city stadiums, including Madison Square Garden), Khalid Rivera first made his name under the Broadway lights. He’s performed inThe Capeman and Juan Darien, and took home the Hispanic Heritage Award for Best Emerging Artist. His stage work has heavily informed his showy, theatrical, and magnetic video performances, and it’s also helped him hone his commanding singing voice. Rivera puts both to good use during “Who Do U Love”, an irresistible club track with relentless beats, whistling synthesizers, and throbbing, insistent bass.

Indeed, the young singer and dancer is the rare artist who is equally at home in a Midtown theater or a Downtown disco. That said, Anthony Fletcher’s clip for “Who Do You Love” takes its cues from Hollywood, not the Great White Way: Khalid Rivera appears in a Matrix-style trenchcoat and Terminator shades. He dances a duet with a figure in a Japanese mask — some of his movements are in response to those of his partner, and others are exact mirror images.

They stalk each other warily, circling one another, occasionally pointing fingers, but shying suspiciously away from direct confrontation. In one dazzling sequence (repeated later in the clip), the lights flash on and off rapidly as the masked dancer moves. It suggests a strobelight, a flipbook, an identity in flux that won’t be pinned down.

We’re very excited to be working together with Khalid to bring you his brand new video! If you need anything Khalid Rivera related to keep you or your viewers happy, please don’t hesitate to be in touch and we’ll hook it up! If you need more info, call Andy Gesner at 732-613-1779 or e-mail us at info@HIPVideoPromo.com .