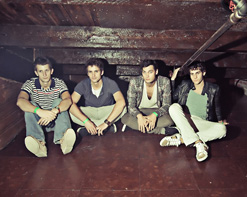 Greetings ladies and gentlemen of the programming world! It’s Andy Gesner here with the HIP crew to bring you a wild, one of a kind video that features things being thrown out of a plane at breakneck speeds! The boys of Kid Savant have spared no sweat in pairing their upbeat take on dark 80s synth rock with the most dangerous visual stunt any indie band has attempted in the recent years. “4 Years” is a stylish and attention grabbing single that has all the makings to be the talk of the video viewing public this summer.

Kid Savant has forged a loyal following through a magnificent work ethic and addicting self-released music on the internet. In fact, Kid Savant’s music was so well received that when the band booked their first tour, they already had a big turnout, including a sold out show in New York City! The band now delivers the same top notch quality on their newest single “4 Years,” which features a fast and racing drumbeat, combined with the darkness of bands like Joy Division, and The Cure. However, “4 Years” is no tribute; it’s a cloaked fresh injection that rocks as hard as it pops. The song is laced with hard hitting drums and raw punk guitar in unison with a lower register croon and a mean vengeance of the synth, allowing for a sound that is as cool and obscure as it is totally worthy of rock radio stardom. Think Interpol and She Wants Revenge meets Ultravox and Pet Shop Boys.

“4 Years” doesn’t shy away visually either, as Kid Savant literally leap into action in this adrenaline pumping clip! Sure this video has splendid performance scenes as the group rocks out in the middle of the desolate desert plain, but that is not all these fearless fighters of the indie rock army set out to do. The band also gloriously ejects numerous objects off a plane, including TVs, lamps, couches, a grand piano, as well as themselves strapped to the aforementioned items. The NYC-based band shot this video out in the only location in America where they’re allowed to drop basically anything they want out of an airplane flying at 15,000 feet! The clip is filled with footage of divers comfortably resting on a living room chair as it tumbles furiously thousands of feet in the air! Just to show off, a parachute is even lit on fire as the must-see finish to this video. Though the song is good enough to speak for itself, the total package Kid Savant offers in “4 Years” is the exciting bit of free spiritedness that indie rock is synonymous with.

We are so thrilled to bring you a video that screams to become a part of your late summer lineup. Kid Savant has crafted a music clip that televisions were made for, and deserve all of your high profile attention! We’d love to hook you up with copies of the band’s upcoming Drop It on the Stereo EP for your consumption and fan giveaways. For more info, call Andy Gesner at 732-613-1779 or e-mail us at info@HIPVideoPromo.com .