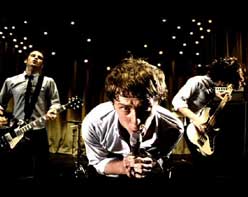 Hello to all my friends out in music video land! It’s Andy Gesner and the staff from HIP Video Promo with the “must see” clip of the fall. The passion and protest of the campaign season are on us in full force, and we’re thrilled to be working with a band that truly captures the urgency of the moment. KillRadio is the most exciting new American band of 2004 and here at HIP we are thrilled to be working this one with John Macchia and all the cool folks at Columbia Records. Together we will be here for you to make sure you have everything you need to showcase this “in your face” musical tsunami to your cherished viewers. The over the top new video “Do You Know (Knife in your Back)” is a blistering, edgy clip featuring the intensity and fervor responsible for the deafening industry buzz this Southern California quartet has generated. Their razor sharp world view and sonically bruising demeanor demands your immediate attention. The Clip was directed by hot newcomer Ryan Rickett of Refused TV.

These politicized rockers broadcast a message of popular discontent at the arrogance of the current regime. Frontman Brandon Jordan sings “they stole the right to be defiant while we’re turning our heads, the informed citizen became Un-American for reading a book instead of watching the television..”, Inspired words that will resonate this fall as politics takes center stage.

KillRadio may rage against the machine, but their music isn’t as assaultive as that other politicized Southern California four-piece. Instead, the debut album Raised On Whipped Cream reveals a band accomplished in many styles: renegade punk and blistering ska, funky rock and roll, and even a little Britpop. (Lead single “Do You Know” is as reminiscent of the tougher side of English rockers like Gene and Suede as it is of Operation Ivy or early Rancid) Brandon Jordan screams and sneers his way through these tracks with the abrasive fury of an agitator on the barricades – yet he always maintains an admirable humanity. For Jordan, the personal is always political, and his disapproval of the status quo blurs into an equally bitter disappointment with other authority figures he has encountered. “I can’t trust the president/or anything that he says”, sings Jordan on the title track, before continuing with an altogether different confession: “I can’t even trust my own mother they were both raised the same way.” These songs don’t preach; they are emotional responses to a political situation that evokes instinctive outrage.

That outrage is made explicit in the clip for “Do You Know”. Jordan takes the part of a schoolteacher, leading a captive class in a lesson in indoctrination. The children sit at their desks, hands folded, staring ahead unmovingly like recruits at military boot camp. They’re in uniform, and they’re as impassive as zombies – they file into the classroom and take their seats with disturbing precision. The KillRadio frontman stalks the aisles, face twisted and eyes bugging out a la Johnny Rotten – he whispers, speaks, and screams the words directly into his pupils’ ears. A devious exemplar, Jordan teaches a child the proper form for knifing a friend in the back. Behind the film projector, he has the flair of a propagandist; at the chalkboard, he is so savagely demonstrative that his pointer snaps in half.

The movie that Jordan’s schoolteacher shares with his pupils is doctrinaire but strangely dreamlike. In form, it bears resemblance to the ’50s conduct films we all remember from our childhood classroom experience (in one shot that will conjure memories of Sunday School for anybody who went, a man carrying an enormous box marked “sin” is unable to get through the doorway to heaven), but some of the images are jarring, unsettling. A man points at a card reading “capitalism”; a bald-headed authoritarian (played by Matt Pinfield in a cameo appearance) holds up a placard with a hand-drawn picture of the devil, girls gossip, a lustful young man chews a hot dog.

The classroom is intercut with an energy packed performance from the band who are performing to a group of men there to censor. Jordan swings the microphone stand from side to side like a loose pole, an angry-looking censor slams a stamp down on a document – rejected, the instructor beats his pointer against his hand, drummer Duke rattles a cymbal with a stick. The band, dressed in white shirts and black ties, play furiously in front of a curtain and a cut-out map of the United States. Major cities are pinpointed in white light. They shine overhead like fireflies, like beacons, like targets

We are all about KillRadio here at HIP and want to be sure your needs are met in a timely fashion. The band will be on tour so if you would like to see this amazing live band or get video IDs, we are prepared to make it happen. If you need more info about KillRadio, call Andy Gesner at 732-613-1779 or email info@HIPVideoPromo.com”>info@HIPVideoPromo.com. You can also visit Columbia Recordsor the band’s own website, for the latest and greatest.