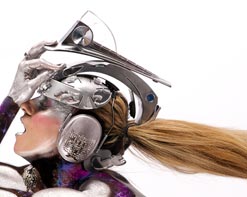 Kim Manning is different things to different people. To many, Kim is the “Rollerskating Songstress” who has been singing with George Clinton and the P-Funk Allstars for a decade. To others, she is known as “Peaches” from the VH1 reality show, Flavor of Love. To others she is known for singing and writing for Atmosphere, with last years release of Southsiders that went #1 on I-Tunes. Kim is also a solo artist in her own right and she has recently completed a very successful Indiegogo campaign to help fund the release of her third solo album, Space Queen. It is our pleasure to bring you not one, but two tracks, from this fabulous collection of songs; “Fireman” and “Tempered Like Steel.”

Space Queen was co-written and recorded with the late Billy Triplett. Triplett was a veteran of the music industry who worked with some of the biggest names in rock and R&B, including James Brown, Prince, Goo Goo Dolls, James Gang, Robert Cray and Pat Benatar. Billy passed away in August of 2013 while mixing the songs for Space Queen. After Triplett’s passing, Manning was fortunate to receive an offer from Keith Olsen to take up the mixing duties. Olsen is a Grammy Award-winning producer and engineer who has worked with Fleetwood Mac, Pat Benatar, and Heart to name a few.

The video for “Fireman” is sultry and sexy from the start. The video embraces the full bohemian culture, shot on location at Burning Man, and indulging in all of the wildness and freedom that takes part annually in the Nevada desert. Kim and her fire company play it up for the camera, cruising around in a makeshift ride that resembles a cross between a fire truck and a bicycle. Even amongst the vast array of characters, Kim is still the standout personality, even though her presence is likely to start a few more fires than they actually extinguish!

“Tempered Like Steel” is another visual ride, complete with live action and psychedelic graphics that crash together into one funky jam. As Kim sings to the camera a wide variety of colors, animations, shapes  and graphics is laid over the top. Much like the song itself has layer after layer of goodness, the video also shows this Space Queen in her element; fun, funky, and fabulous!

It’s our great pleasure to be working side by side with Kim Manning to bring you her brand new efforts. These two clips are sure to heat up your playlists, so please get in touch with us here at HIP Video Promo if there is anything we can do to get these videos into your programming! Please contact Andy Gesner and the HIP Video Promo crew at (732)-613-1779 or email us at  info@HIPVideoPromo.com . You can also visit www.KimManning.com/ for more info on Kim Manning.