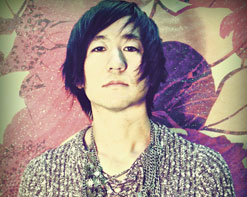 K Ishiabashi has had a busy 2012 so far. As the principle member of the self-recorded and self-produced project Kishi Bashi, he has seen his music included in a wide variety of media. His first single (appropriately titled “It All Began With A Burst” was premiered on SPIN.com, his song “Manchester” was featured in an American Express commercial during the Academy Awards, and his newest single “Bright Whites” was included in the NPR All Songs Considered podcast. All of this while pulling double duty on the most recent of Montreal/Loney Dear tour. Not only did Kishi Bashi win over audiences as the opening act, but he also performed every night as the violinist for of Montreal. It’s really no small wonder to see why the folks at Joyful Noise Recordings was quick to pick up and release the new album, 151a, as a part of their impressive catalog.

Ishiabashi is no stranger to the big stage, having made a name for himself as a founding member of the ever popular NYC rockers Jupiter One. His time in Jupiter One helped him hone his songwriting and performance and also set him up as a working violinist, not only with of Montreal, but also as a touring member of Regina Spektor’s band. His live show consists of a solo performance of live violin, vocal looping and beat boxing. His knack for wowing audiences and winning over fans is apparent not just in his live show, but also in the fact that his recent Kickstarter campaign to help fund the release of 151a not only met its goal, but also nearly doubled the fiscal needs! There are few ways better to express how dedicated a fan base is than to see them back an artist on Kickstarter, and this is an example of an artist who is clearly beloved by his fans.

He never disappoints either, and in the new video for “Bright Whites”, Kishi Bashi takes us on what could be described as a whirlwind magical carnival ride full of mystery, action, drama and even a healthy amount of love story! Ishiabashi is the protagonist in this tale, decked out in full feathered costumes, as he plays the part of a caged carnival exhibit kept against his will by the greedy circus owners and their goons. His love interest in another bird of a different feather who is locked up in the cage over. The local town folks all come down to see the spectacle, but it’s really only a matter of time before Ishiabashi is plotting his escape with his love interest. WIll he make it? Will they fly away to a better place? We don’t want to give away the ending but this is a beautiful clip you really must see to fully appreciate!

We’re very excited to have our first opportunity to work with the folks at Joyful Noise Recordings to bring you this magnificent clip. They’ve been kind enough to hook us up with copies of 151a, so please don’t hesitate to be in touch if you’d like to get your hands on some. For more info you can also contact Andy Gesner and the HIP Video Promo crew at (732)-613-1779 or email us at info@HIPVideoPromo.com”>info@HIPVideoPromo.com. You can also visit http://www.JoyfulNoiseRecordings.com or http://www.KishiBashi.com for more info about Kishi Bashi.