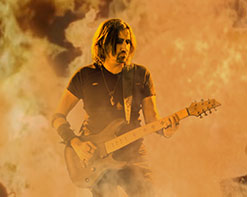 Kivanc Kilicer is an artist who has seen all sides of the metal and hard rock scene, both as his time as a band frontman and now as a solo artist striking out on his own. His brand new video and single, “Devil’s Thought,” is an ambitious, impressive sample of his new Dew of Roses EP. On this new EP he has found the sound he believes he has been chasing all along.

Kivanc’s first taste of success came as the lead vocalist for Element, a band whose accomplishments across Europe are nothing short of impressive. The band opened for the legendary Scorpions and Europe (the band), had their music featured in jingles and commercials, and finding fans in every corner of the continent. After Element he launched Gravity, a project that explored mixing various genres into hard rock songs.

Finally stepping out on his own, Kivanc is fully embracing his lifelong interest of combining progressive rock and symphonic arrangements. It’s no easy feat, with Kilicer noting that both “require special attention on emotions, balance and clarity.” After building his own home studio, he was able to fully immerse himself in this new form expression and art!

The “Devil’s Thought” video is sure to send chills up even the firmest spines. This haunting clip tells the tale of a young woman caught up in a frightening game of cat and mouse within her own home. With all of the suspense and gripping nature of a classic horror movie, she hides in terror as her home is burned to the ground. An attempted escape by car proves equally futile, ultimately bringing her face to face with the devil she has brought unto herself. Amongst the chaos and fury is Kivanc, ripping off a flurry of blistering riffs, rocking out like a heavy metal Nero as the world burns around him.

It’s very exciting to have the opportunity to work closely with Kivanc Kilicer to bring this video to the forefront of the music video programming landscape. This Turkish artist is a truly global commodity and we are hopeful you will embrace it like we have! For more information please contact the HIP Video Promo team at (732)-613-1779, email us at info@HIPVideoPromo.com. You can also visit www.KivancKilicer.com for more info on Kivanc Kilicer.