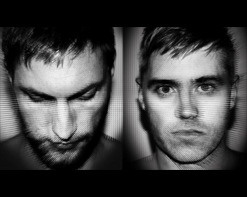 After spending years doing things the way bands are “supposed” to do things, when Michael and Charles came together to form KNTRLR (pronounced “controller”) they decided they would do things differently. Rather than slugging it out on the road and allowing outside opinions and trends influence their sound, and to spend weeks and months putting out full-length albums that can be chronically overlooked in modern music, their approach was much more methodical. They would craft the songs and make the recordings in small batches, which would allow them to really hone in on their sound, even before figuring out the logistics of the live. Without the restraints that many artists place on themselves they’ve been able to create a distinct presentation of their art.

For their newest single “CCA” the band chose to address a non-traditional topic that may not immediately seem like the sexiest thing to sing about; the American prison system. But the intensity and passion behind the music and the vocal delivery is clear that this song is written from a complicated place indicating some sort of personal connection to the subject. Lyrically it’s a brutally honest assessment of a non-functioning element of our justice system that incarcerates far too many non-criminal victims and never truly rehabilitates those who need it the most. For such a cerebral topic, the concept for the video needed to match the fire and intensity of the song itself. The band cast two male leads for the video (KNTRLR appears in the performance footage for the video) and what ensues is frantic game of cat and mouse. The chase begins in the tight corridors of an old warehouse between two handsome and dapperly dressed men. The action soon moves outside onto the city streets and never relents on the pace. The climax comes in a darkened city park with the NYC skyline glowing across the river. Their struggle is brutal and angry as they trade blows. If you look closely they begin to trade places in battle and leave us wondering who is really fighting who and if it’s not just a reflection of someone battling their own demons?

As a bonus the band has also included their “Kursk” video from last year. Shot in various locations in places like upstate NY, Paterson, NJ, and an abandoned shipyard in Long Island, the video is a visual stunner, invoking an almost post-Soviet Eastern European aesthetic with its crumbling buildings, rusted out vehicles, and majestic forests that could make the viewer feel as though they are taking a trek through the former USSR. The cinematography and coloring is the big selling point as the video follows a female lead wandering through the various environments, invoking an enchanted fairy tale vibe. Though not as frenetic as “CCA”, “Kursk” is equally powerful and passionate, and the two combined paint a diverse and impressive picture of what KNTRLR is capable of.

We’re very pleased to be working with the Goodnight Records crew to bring you these excellent videos! Please don’t hesitate to get in touch if there is anything we can do to get these videos into your programming. Contact Andy Gesner and the HIP Video Promo staff at (732)-613-1779 or email us at info@HIPVideoPromo.com. You can also visit www.KNTRLR.com for more info.