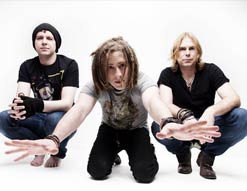 Hey there, programming friends! It’s Andy Gesner and the HIP Video Promo staff bringing to you a clip that’s an ode to old school rock ‘n’ roll videos where it’s stripped down to an awesome performance and a sultry model thrown in for good measure. Kopek may be relatively new to the game, but you’ll find these Dublin-based alt-rockers know just how to hold their own.

If there’s one thing you need to know about Kopek, it’s that they put on a killer show – and they certainly play up their strengths in their video for “Love Is Dead.” The clip starts off with the aforementioned scantily clad model turning up the volume on her amp. The music gets to her so quickly that she starts with some racy dancing before slinking her way across the room, seducing the audience just as hard as Kopek’s anthemic lyrics invades our ears in the best way possible. All the while, Kopek is putting on the show of their life. The lighting of their stage is impeccable, casting faint silhouettes from afar and hitting you hard with strobe lights as the band gets even more energetic.

This isn’t your typical performance video though. Not by any means. What makes “Love Is Dead” a standout is that while vocalist/guitarist Daniel Jordan is belting out what he considers to be dead – an array of drugs, music icons like Hendrix and Elvis in addition to Jesus, among other things – they appear as animated tattoos on the model’s nearly bare body. The blonde bombshell ends up being an artistic canvas masked under the distraction of her overpowering sexuality. Don’t be fooled though because she acts just as shameless and in your face as Kopek’s music.

Suffice to say, “Love Is Dead” is a straightforward video filled with classic rock ‘n’ roll distractions. It’s also the debut single from the band’s upcoming album White Collar Lies, set to drop sometime in June. Kopek collaborated with multi-Grammy winners Tom Lord-Alge to mix the album and Ted Jensen to master it, so you can expect some pretty big things. Having won Global Battle Of The Bands and the title of best live act in the world 2005, which was judged by world renowned Grammy Winning producer Steve Lillywhite (U2) and Glen Matlock of the Sex Pistols, “Love Is Dead” is simply the tip of the iceberg for this trio.

Thanks a ton to the crew over at Religion Music for presenting us with this remarkable new video. They’ve hooked us up with lots of copies of White Collar Lies for your on-air giveaway needs so please don’t hesitate to be in touch if you’d like to get your hands on some! If you need more info, call Andy Gesner at 732-613-1779 or e-mail us at info@HIPVideoPromo.com . You can visit www.ReligionMusic.com or www.KopekOfficial.com to find out more about Kopek.