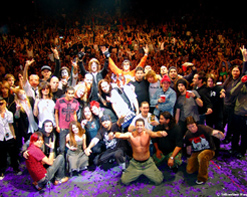 Greetings to my beloved music video programming family! It’s Andy Gesner and the staff from HIP Video Promo, back with another indie clip from a classic band. Back in the early Nineties, nobody had heard of “nu-metal”, and the idea of combining rap music with heavy rock was confined to a few groundbreaking producers. Then came KoRn, and the world of music has never been the same. It’s impossible to take the full measure of their influence over their contemporaries. But it’s fair to say that if you’d turned on a rock radio channel a few scant years after their initial commercial success, you’d hear songs by KoRn, and songs by a small army of bands who were trying to be KoRn. We don’t need to name names: all those bands have been more than willing to pay respect to the originators. Ask a contemporary metal or hard-rock band to list their influences, and it’s a sure bet that KoRn will be at the top of their list.

Still community-minded after more than a decade at the top of the modern rock charts (and after 25 million albums sold), the quartet has recently revived its annual Family Values tour. In the late nineties, Family Values was the home for big-name metal and hard rock: Incubus, Limp Bizkit, Filter, Linkin Park, Staind, and many others joined KoRn on the arena stage. The 2006 version of the tour showcased a new generation of bands that have drawn from KoRn’s legacy, including The Deftones, Flyleaf, and Stone Sour. This summer’s Family Values was the biggest ever – more than 400,000 fans attended – and the first that was so expansive that it spilled over to a second stage.

So successful was the tour that KoRn is chronicling it with a CD and DVD release – Family Values Tour 2006. The DVD features five clips of KoRn in performance, but the quartet shares space with co-headliners The Deftones, mainstage performers Flyleaf and Dir En Gray, and even second-stage stars 10 Years. But KoRn are the hosts, and they’re the act that makes the greatest resonance and impact. The arena seems perfectly tailored for them: a canvas on which they can project their neuroses, their urban nightmares, and their unforgettable stories of lust, decay, confusion, and destruction.

KoRn has always been an album act; LP craftsmen with ideas that unfold and reverberate over a series of tracks. But they’re reliable modern rock hitmakers, too, and “Coming Undone” was the biggest single cut from See You On The Other Side, their million-selling 2005 release. It’s an expression of bewilderment and loss, and frontman Jonathan Davis discharges it with all the vigor, pained ambivalence, and dangerous intellect we’ve come to expect from him. But although the song has deep and apparent personal meaning to Davis, he hasn’t been territorial about it: he’s allowed Houston deejay Michael Watts to produce a chopped and screwed version of the cut, and he’s also authorized a mash-up with Dem Franchize Boyz’s “Lean Wit It, Rock Wit It”. Unlike other bands that work this territory, KoRn has always loved and understood hip-hop, and sought out the best and hottest in the industry to work with.

The live DVD footage of KoRn performing “Coming Undone”, however, is straightforward and stripped-down: four guys rocking ferociously at the peak of their ability. Davis’s connection with his audience is palpable – custom-made mike stand forgotten, he stalks the stage like a hunter, spitting his lyrics at the capacity crowd. Puppets dance on the drum riser, but all eyes are on the musicians and tour headliners as they prove, once again, that modern rock contains no more powerful force.