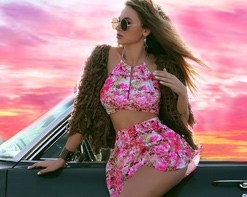 LA-based KORR-A has been an explosive presence on the Dance/EDM landscape in recent years. Whether it be opening for Jennifer Hudson and Azealia Banks, collaborating with Grammy-winning producer Dave Aude on the Billboard charting single “Fiyacracka,” or receiving international support from DJs like Hardwell (who opened his podcast with it), Chuckie, Paul Oakenfold, and Laidback Luke, this dynamic diva is all about connecting with the crowd and encouraging everyone to let loose and go crazy! In her new single, “Cali Love,” she does exactly that with the help of producers Lodato and The Extraordinary Gentlemen!

This former professional dancer has a lifelong love of performance engrained in her spirit. Bringing her love of both music and performance art under one banner was the only logical step for her. She crashed onto the scene with her powerhouse single “Fiyacracka,” which reached #18 on the Billboard Dance Club Charts, #12 on UK’s Music Week Commercial Pop Charts, and #7 on the DJ Times National Dance/Crossover Charts. She quickly followed that up with “Everybody Gets Down,” “Swipe Right,” and “Touch Me Like You Mean It,” all of which continued to establish everywhere from the clubs of LA to the farthest reaches of the globe. But whether it be performing at the Miss Mexico pageant or at the My Way Awards in Ukraine, this California girl always comes back home because she knows that the SoCal living is as good as it gets. With her new video for “Cali Love” she gives viewers a taste of what it’s all about.

The Jensen Noen (Scissor Films) directed “Cali Love” is a video that follows in the footsteps of many before it, using the natural beauty and unmistakable landscape of the California coast as the centerpiece. KORR-A is an unapologetic champion of the Golden State, and she has a big crew to back her up. KORR-A and her crew start the day off cruising on the unmistakable Pacific Coast Highway in a pristine, classic Chevy convertible. With miles of perfect oceanfront, they pick a spot and bring their party to the beach. KORR-A and her crew kick back for hours on end, and as the sun drops creating one of those famous California sunsets, this party shows no signs of letting up. And why would it? If you thought Cali days were amazing, just wait until nightfall!

We’re really pleased to be a part of the KORR-A team to deliver this fine jam to viewers and programmers alike! Please don’t be shy about letting us know what we can do to help get this video into your programming. You can contact Andy Gesner and the HIP Video Promo team at (732)-613-1779 or email us at info@HIPVideoPromo.com. You can also visit www.Facebook.com/KORRAmusic or www.Twitter.com/KORR for more info on KORR-A.