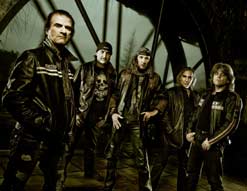 Think back to 1983: heavy guitar was king, and Krokus was one of the style’s foremost practitioners. Headhunter, their ’83 release, took metal-loving America by storm, and blistering power ballad “Screaming In The Night” remains a hard rock standard. The next year, the infectious “Midnight Maniac” established Krokus as an MTV favorite as well as an international arena-rock attraction. Here was a heavy band that could write a hook as irresistible as those by any mainstream pop group, and wail as ferociously as any metal combo. And Krokus boasted one of the true heavy guitar icons of the period — the mercurial Fernando von Arb, whose long blonde locks were the perfect visual complement to his scalding leads.

Styles change and tastes shift, and even AC/DC — the band Krokus is most frequently likened to — went into partial eclipse in America. But Krokus went right on doing what they do best: writing thunderous hard rock anthems and performing them to stadium-sized crowds of frenzied headbangers. In their native Switzerland, they’ve always been rock superstars, regularly storming the mainstream charts with their album and single releases. And lately, there’s been a resurgence of interest in Krokus stateside, too — 2006’s Hellraiser, the band’s twentieth(!) album, broke into the Billboard 200.

So it’s not without good reason that we assure you that America is primed for Hoodoo. This is Krokus in overdrive: dirty blues-rock and distorted six-string, classic Euro metal shoutalong choruses, catchy riffs, and, of course, plenty of electrifying solos. It’s a style that, thankfully, never goes out of fashion, and on Hoodoo, Krokus demonstrates that few do it better than they do. Even more exciting to fans and critics alike, Hoodoo was recorded by the classic Krokus lineup — the same band that unleashed Headhunter and The Blitz. That means frontman Marc Storace is on hand to deliver the take-no-prisoners three-octave vocal performances that he’s known worldwide for, alongside bandmates Chris von Rohr, Fernando von Arb, Freddy Steady, and Mark Kohler. “Hoodoo Woman” is a showcase for Storace, and he takes advantage of the muscular support his band gives him, spitting out menacing verses about the delicious misdeeds of his ancestors.

Clips for hard rock songs like “Hoodoo Woman” require a combination of sex, violence, and deep psychology, and Krokus doesn’t disappoint. We don’t want to give away the twist ending of the clip, but we can tell you all about the buildup: a larcenous-looking couple experiments with black magic, and even abducts a teenage girl on a dark highway for use in a diabolical ritual. There’s no separation between the devil-couple and the band: Krokus plays in the same room with the voodoo practitioners, providing a suitable soundtrack for their nefarious activities. Storace, in particular, dominates the frames with the same ease he did in ’83, barking his warnings, roaring ahead into the next decade.

We’re psyched to be working the good people at Sony Independent Network to bring you this instant classic! If you need more info, call Andy Gesner at 732-613-1779 or e-mail us at info@HIPVideoPromo.com . You can also visit www.KrokusOnline.com to find out more about Krokus.