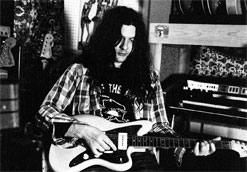 Coming out of his shell from Philadelphia, Kurt Vile has been commanding the streets ever since he found his direction. Originally starting the prominent band The War on Drugs in 2005, he has earned the title of an effortless rock star. Due to creative differences, he wandered away from the group as his own lone wolf. Under the same genre of indie rock, neo-psychedelia, and folk, he has constructed music that breaks the barriers of the present moment. Typically spacing out while writing his songs, he crafts complex sonic spoken poetry delivered by his haunting vocal talent. He doubles as a walking paradox as he produces light beats with dark undertones on his journey to find himself with no restriction on time and a rejection of the future.

Accepting himself as an outsider without being too cynical, he has arrived just in time for the pinnacle of his career. While dissociating in and out he has put out seven completed projects starting in 2008 with Constant Hitmaker, God Is Saying This to You…, Childish Prodigy, Walkin on a Pretty Daze, and Lotta Sea Lice in 2017. Dazed but not confused, he has had several Billboard Top 200 records including b’lieve i’m going down… at #40, Walkin On A Pretty Daze at #47, Lotta Sea Lice at #51 and Smoke Rings For My Halo at #154. Signed to Matador Records, his discography is complete with psychedelic cover art perfect for a festival headliner. His natural storytelling abilities are amplified as his thought to be singular experiences evolve into a universal understanding on his journey to find his voice. With his combination of fuzzy live instrumentation, exceptional guitar tone and blue-collar rock sentiments, it is no wonder why Kurt Vile continues to tour the world to this day.

Kurt Vile is now ready to open the world to his thought process with his new music video for “Loading Zones.” Set in his hometown in “dirty” Philadelphia, he breaks the law in the most minor way- gathering a plethora of parking tickets throughout his seemingly smooth drive. This small act of rebellion only grows as the police force becomes uneasy with his defiance. Directed by Drew Saracco, he pushes and pulls his feelings about the town with his familiarity at one end and his discontent about uniformity on the opposing side. Even parking in the street, he shouts a subliminal message of feeling internally lost masked by an effortless uncaring attitude. The video closes as Vile abandons his car and leaves his town behind- with the last final laugh coming from the law.

We’re honored to be working with Kurt Vile, and we hope you embrace the new clip for “Loading Zones”. We’d love to see this video added into your cherished programming and online presentations in a timely fashion! Rest assured we’ll have plenty of Kurt Vile merch available for on-air contests and giveaways so don’t hesitate to get in touch. For more information on Kurt Vile, please contact Andy Gesner and the HIP Video Promo team at (732)-613-1779 or email us at info@HIPVideoPromo.com. You can also check out www.instagram.com/KurtVile and www.Facebook.com/KurtVileofPhilly for recent updates on Kurt Vile, or visit www.KurtVile.com for more on this lovely loner.