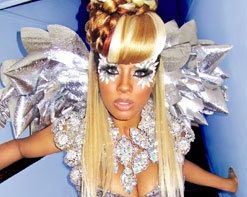 Kwanza Jones established her dance-pop credentials in 2011 with her Billboard charting hit, “Think Again.” This song signaled theSupercharged sound for Jones, who is known for her never-ending energy and non-stop curves. Born in Los Angeles on Thanksgiving Day, Kwanza exhibited a certain star quality from childhood to present — often winning beauty and talent contests, including the Miss Baltimore pageant. The daughter of two lawyers, Kwanza foresaw a career on the business and legal side of the entertainment industry. However, a chance meeting with Quincy Jones and a performance at the world famous Apollo Theater, altered her course. Despite the lure of the Hollywood lights, Jones chose to spend time in New York City honing her songwriting skills, teaching herself guitar, attending law school and “getting some life lessons.”

Other life experiences include Kwanza’s brush with “love gone wrong“, when she was kicked out of her New York apartment during the winter. This planted the seeds for her anthemic songs about strength and self-reliance. These songs can be heard on her upcoming release, Supercharged. This album, a fusion of dance and pop, is produced by Luke Tozour (Katy Perry, P!nk, Mika, Adam Lambert, Selena Gomez). When asked to describe herself to a new fan, Kwanza says, “I’m a gladiator in a thong.” In talking about her upcoming album, Supercharged, Kwanza says, “it’s music for superheroes and divas (or those who want to be).”

The video for “Time To Go” is every bit as ferocious and undeniable as Kwanza herself. With her non-stop curves on full display and a wardrobe selection that has been called Futuristic Haute Couture, Kwanza puts her star power out for the world to see. Whether it be the illuminated silver and gold, or the classic floor length red dress, every detail is finely tuned and meticulously groomed. The video is shot with a professionalism that is second to none, with a wide variety of pro lighting and scenery changes to help lead us through the clip. A young boy is witnessing Kwanza’s arrival and sci-fi inspired performance and although he wasn’t prepared for what he saw, we feel his reaction is one that many viewers will relate to, being instantly drawn in, not turning away!

More than a singer and songwriter, Kwanza Jones is an “Ambassador for Equality” — an outspoken supporter of equality and empowerment causes. She unashamedly uses her blend of vicious energy, divalicious looks, daredevil spirit, and supercharged beats to keep the world listening and that’s why we’re so proud to be working with her!

Big thanks to Eric Latour and the crew at Innovation Entertainment for bringing Kwanza to our camp, they’ve hooked us up with everything we need to make sure that the “Time To Go” video is in your rotation so don’t hesitate to drop us a line! For more info contact Andy Gesner at HIP Video Promo at (732)-613-1779 or email us at info@HIPVideoPromo.com . You can also visit www.InnovationEntertainment.com or www.KwanzaJones.com more info on Kwanza Jones