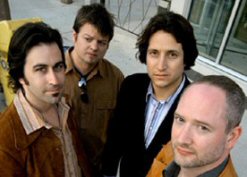 Greetings! It’s Andy Gesner and the staff at HIP Video Promo, bringing you another clip from a great independent rock band. We’ve worked with Rainbow Quartz Records before, and we’re sure you’re familiar with the sort of music that the label puts out: swirling, tuneful retro-sixties psychedelic guitar rock. The Lackloves epitomize the Rainbow Quartz style – bright and Beatlesque, their songs jangle and spin, and ride along on crests of vocal harmonies

If you haven’t yet heard of this group, chances are, you’re not from Milwaukee. In their home city, the Lackloves are considered indiepop royalty, and each new release is greeted with interest and enthusiasm. Frontman and guitarist Mike Jarvis was a driving force behind the Blow Pops – Badger State favorites who released two of the best-loved underground power-pop records of the mid-nineties. If you’re lucky enough to have a copy of American Beauties in your collection, you’re probably not letting it go. The limited-release Blow Pops album features fourteen slices of indelible and unadorned melodic rock, and has been one of the most sought-after discs on ‘net power-pop circuits and discussion boards since its 1994 release

The Lackloves pick up where the Blow Pops left off, crafting thrilling British Invasion showpieces and Byrds-y excursions into the harmonic stratosphere. The Beat And The Time, the quartet’s most recent release, touches on the band’s usual range of influences: Beatles beats and Raspberries hooks, and a guitar sound indebted to Roger McGuinn. But “The Radio’s Mine”, the lead single from The Beat And The Time, shows a tougher side of the group. There’s a bit more edge to the vocals, a little more urgency to the backbeat, and some grit in the guitar tone.

And why not? With this song, The Lackloves – generally found singing about their romantic misadventures – have written a spirited defense of the power-pop project, and crafted a challenge to the commercial radio stations that ignore their chosen subgenre. “It’s a mighty fine day/ for taking over airwaves”, sings Jarvis – hopefully, if a bit sarcastically. He knows that no matter how immediate, catchy, or compelling a pop hook he crafts, the local voice of ClearChannel will make their playlist decision on something other than intrinsic merit. Jarvis confesses that he can’t even recognize the radio anymore, but continues to sing out anyway, confident that the potency of his plea will find it an audience.

The video finds the band in a verdant field on a glorious summer day – exactly the sort of afternoon that The Lackloves’ music suggests. Behind the group, the radio broadcasting towers stand, imposing and silent. The structures look artificial and unnecessary; a technological intervention into what ought to be a scene of purity and vigor. Framed by the towers and the green grass, the group plays. Aligned with the natural beauty of the meadow – not the incongruous rigs – they direct their call-to-arms to the camera.

Interspersed among the performance footage is a lighthearted narrative that nonetheless addresses the serious subject of the song: how does a band as good as the Lackloves get their music to audiences when commercial radio doesn’t allow them an outlet? Singling out an attractive female fan, the members of the group follow her from bedroom to sidewalk café to record store, attempting to attract her attention. It’s meant to be cheeky, and it is – but in the context of “The Radio’s Mine”, its desperate undercurrent is all too evident. Here’s a band that has paid their dues (they’ve toured America, Europe, and Japan), released critically-acclaimed albums, and arrived at an immediate, radio-ready sound reminiscent of everybody’s late-Sixties favorites. Yet the record business – with its tight stranglehold on the airwaves – makes it tough for them to get their message across. Redress this wrong by giving their video a chance!

It’s always a blast to work with Rainbow the Rainbow Quartz team, and we know we can count on them for consistently high quality music. Big thanks to Matt Smallwood and Jim McGarry for bringing us on board for this promotion. If you need more info, call Andy Gesner at (732) 613-1779, or email info@HIPVideoPromo.com.