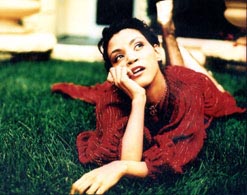 Greetings music video lovers far and wide! It’s Andy Gesner and the staff from HIP Video Promo, keepin’ it comin’ with another high energy clip that’s sure to keep you on your toes during these winter months. Since we sent you the video for “Dogg Starr”, the first single from Ladybug Mecca’s solo album Trip The Light Fantastic, plenty has happened for the legendary front woman of Digable Planets. For one thing, you can’t turn on MTV Jams these days without hearing her voice and seeing her face. “Candy (Dripping Like Water)”, the latest smash hit from Snoop Dogg, is built around a sample from a verse Mecca dropped on Blowout Comb. She stars in the video, too, confidently striding down the Bay Area streets, flanked by hyphy superstars E-40, MC Eiht, and Snoop himself. The “Candy” clip is a typically rambunctious hip-hop video, but Ladybug Mecca manages to add a touch of class to the party. Then, Snoop returned the favor by adding Mecca to the remix – and the verse she contributes is quietly electrifying. (For a limited time, Ladybug Mecca offered free downloads of the remix on her MySpace page; it can still be streamed from that site.)

Now, she’s back with a propulsive remix of “Dogg Starr” – and a new video to go with it. And she’s brought along friends: Jive recording artist Raheem DeVaughn lends his butter-smooth pipes to the hook. DeVaughn’s 2005 debut The Love Experience introduced the young singer as an attentive student of R&B history – his elastic vocals drew comparisons to the great soul shouters of the Sixties and Seventies. Kenny “Dope” Gonzalez – half of the Grammy-nominated Masters At Work remix team – produced The Love Experience with the same sensitivity and urgency that has marked his interpretations of tracks by Jill Scott, The Brand New Heavies, and many others. Kenny Dope is a master of many idioms, and he’s funky in all of them. On the “Dogg Starr” remix, he proves just how well he understands progressive hip-hop: his moves are exciting and innovative, but he never gets in the way of Ladybug Mecca while she’s rapping. Every time he flips the beat, Mecca and DeVaughn respond by taking the remix to a higher level. The result is a club banger that a hardcore hip-hop head can appreciate, and a perfect fusion of heady alt-rap verses and radio-ready production.

Young directors Karma 1 and Julian Renner know just how to present Ladybug Mecca: stylish, alluring, tough, sophisticated, and always formidably intelligent. Their clip for the “Dogg Starr” remix captures her gritty glamour, but it doesn’t dwell too long on it. Instead, we’re invited to see her in her element: the New York City streets, warehouses, and apartment blocks that she has always chronicled in her rhymes. Most of the clip is shot in black and white, but Renner and Karma 1 afford the viewer some welcome splashes of color: the siren on an NYPD police car, the rapper’s yellow jacket, her lips as she’s speaking. DeVaughn, too, is an able video performer and a true son of the city streets – when he swings out of a phone booth and croons the chorus into the handset, he does so with the comfort and élan of a veteran straphanger. At the end of the clip, singer and rapper are united in an apartment; she’s on a sofa, and he sits on the floor before her. The camaraderie and respect between them is genuine, and infectious. This is vibrant music from wholly uncompromised artists, working together to reinterpret one of Ladybug Mecca’s finest rhymes.

It’s one of our greatest pleasures to be working again with Nkosi Gray at Nu Paradigm Entertainment and Jonathan McDonald and the crew at OM Records for another stunning Ladybug Mecca clip. We’ll have plenty of copies of her albumTrip The Light Fantastic on hand as well as copies of the Dogg Starr EP for all your giveaway needs. If you need more info, call Andy Gesner at 732-613-1779 or e-mail us at info@HIPVideoPromo.com. You can also visit www.OM-Records.com, or www.LadybugMecca.com to find out more about Ladybug Mecca.

For more information regarding Ladybug Mecca’s previous videos, “Dogg Star” and “You Never Get Over It” click HERE