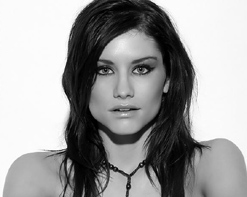 Greetings fellow rock lovers! It’s Andy Gesner and the staff from HIP Video Promo, here to spread the word about a pair of stunning videos from an outrageous new band on the rise. “Only 20”, the latest single by Landon, is a pure summertime rock treat – a blast of Cali heat and old-fashioned American bad attitude – and it’s got a clip to match. And since too much of Landon is never enough, the band has appended to the reel the sexy and hilarious video for “Red Lipstick”. Both clips add to the mystique and aid the band’s assault on the charts, and reaffirm Landon’s undisputed status as an irresistible electro-rock force.

Any discussion about the Landon Band begins with Landon herself. We’ll start with the obvious: she’s gorgeous. Thousands upon thousands of musicians will release new albums this year, and not a single one of them will look the part of a superstar any more than Landon does. That’s something for music-video fans to cheer about. But that wouldn’t matter at all if she weren’t also a ridiculously talented vocalist – capable of chatting her way through a verse before roaring into a gigantic rock chorus. “Only 20” begins conversationally, casually; before you know it, Landon is singing at the top of her voice with all the assurance of a megaplatinum pop star. Comparisons to Shirley Manson are more than warranted, especially since Landon, like Manson, has a sharp tongue, a wicked and self-deprecating sense of humor, and sufficient lungpower to match the heavy wattage of her group.

That’s because Landon is much more than a one-woman show. The Landon Band is a skilled and clever outfit, drawing rhythms from rap and industrial music, sounds from electro, trip-hop, and the top of the charts, and a stance and strut from hard rock. It’s the band that gives “Only 20” much of its jagged edge – these guys can match wits with their frontwoman and throw down as ferociously as she can. They know their Nine Inch Nails records, for sure, but they can also match Landon’s witty L.A. storytelling with straight-ahead Aerosmith-style heavy rock. Later this month, they’ll be matching riffs with The Plain White T’s at a show in Hawaii; until then, you can catch them on Southern California stages, knocking the beautiful people dead.

And that is, more or less, what “Only 20” is about – the narrator is a sexy young woman (based on Landon herself, perhaps?) who is a year shy of drinking age and restless. In Justin Janowitz’s provocative clip, Landon’s character wakes up in a typical Southern California flat, gets dressed and hits the dark freeway; the world around her seems trippy, choppy, she’s half-awake, imperiled, and beleaguered. Once, she’s in the club and onstage, though, everything changes: she’s in total control, teasing the audience and her bandmates, and radiating charisma. Toward the end of the clip, the pace of Janowitz’s editing becomes frantic – images of the Landon band in action speed by in a blur. Before long, the viewer realizes that we’re hurtling backward through still shots we’ve already seen; the clip concludes with an image of the same alarm clock that roused Landon at the beginning of the song.

As a bonus, we’ve included the clip for the fiery “Red Lipstick”. Here, the group is dressed as a paramilitary band in action; Landon herself wears a button-up uniform, a short skirt to match, and some very guerrilla-chic red boots. As in the “Only 20” clip, the musicians look like they’re having a hoot: the Landon guitarist stalks around the desert in fatigues, the drummer takes his “combat” cigarette to the kit, and the frontwoman gets to gleefully stab the backs and snap the necks of her opponents. “Intelligence is the best weapon”, she sings, echoing the line in “Only 20” when she explains that because of her appearance, people tend to underestimate her cleverness. Not for long.

Huge thanks to Warren Wyatt and Julie Hines at WorldSound for bringing us on board to be a part of the promotional team. We’ve also been hooked up with some super cool items for on-air giveaways! Every time you play either Landon video, we will enter your name into a drawing to win a customized Landon snowboard and skate deck! This is some seriously cool stuff, so make sure you keep these videos in rotation! If you need more info, call Andy Gesner at 732-613-1779 or e-mail us at info@HIPVideo.com.