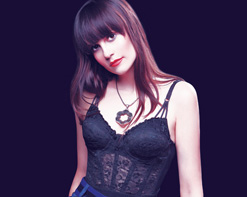 Howdy programmers! It’s Andy Gesner and the HIP Video crew, here with a pop diva that has shaken up the Texas scene and gained some notoriously famous friends in the process. Larissa Ness combines her classically trained musical talents with foreign tongues, synthesizers, and a bit of dystopia in her latest video for “Let It Go,” a memorable dose of caffeine and sugar your brain has been begging for.

Larissa Ness has been destined to be the “IT” girl from the start, sitting down to play the piano at age 3. Since then she’s released a volume of albums across the genres of jazz, latin, hip hop, and pop in her quest to take over the world. “Je T’aime,” the first single from her debut album Texture Vision, appeared on MTV, VH-1, SPK, NICK,FXNC, SciFi, and ENT as part of the B&H Music Stores commercials, featured in the New York independent film Dykeotomies, and was aired on Austin’s biggest rock station 101-X. Larissa also penned the theme song for the upcoming indie flick Lost In Sunshine. The multifaceted diva didn’t stop there, as she released I’ve Found You, a jazzy Latin flavored EP that featured world renown Latin groups, Cienfuegos and the Grammy-nominated band (and HIP alumni), Grupo Fantasma as well as Hello, a pop record featuring rapper Ray C, which received radio play in the US, England, France, and Germany. She’s performed at the Playboy Mansion and had shared the stage with celebrities like John Secada, Dennis Quaid, and Teddy Mulet of the Miami Sound Machine. To top it off she’s also the singer in the Wii game All Star Cheer Squad 2.

Now Larissa is set to dominate screens nationwide with her edgy “Let It Go” music video, which is the leading single from her new album Break The Mold. Science fiction buffs can rejoice as Larissa pays tribute to Orwell’s 1984, appearing as a victim of the impeccable thought police. This clip finds our lovely heroine in the arms of an agency set on turning the world into mindless drones in the name of progress; her crime – love. Larissa sits through a trial where the committee discusses her fate for committing a crime that is so utterly human in nature. Flashbacks chronicle Larissa being stripped away from her lover, as the guards discover them locked in a kiss on a secluded field. The whole montage of events is spliced together with performance shots of Larissa playing her piano in an open field. Larissa doesn’t shy away from pushing the fantasy by donning an array of over-the-top outfits and employing a realistic ending that will certainly shock most viewers. The song itself shows off Larissa’s keen sense for pop, as the chorus is nothing short of massively and instantly memorable. We’d also like to note that the breakdown is in French for a bit of “vive émotion”

We are thrilled to bring you a pop star that isn’t afraid of accomplishing a lot independently, while stepping way outside of her genre. As long as civilization exists, dystopia never goes out of style, so add this sci-fi hit to your playlists today! We’d love to hook you up with some Larissa Ness stuff for contests and giveaways, so don’t be shy about reaching out to us. If you need more info, call Andy Gesner at 732-613-1779 or e-mail us at info@HIPVideoPromo.com. You can also visitwww.LarissaNess.com to find out more about Larissa Ness.