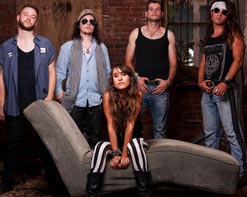 Lawless Hearts firmly believe you can’t dream without hope, and you can’t hope without dreaming up something bigger than yourself. After all, a song starts with an idea. A moment of clarity in all the chaos, and with their new single for “Creatures of Habit,” they are that moment of clarity. The combination of vocalist Alex Marie, guitarists Michael Thomas and Justus Sutherland, bassist Rob Joseph, and drummer Corey Ahlquist finds 5 distinct musical voices coming together to form one powerful voice that cuts through the noise and leaves a robust impression on the audience.

With Lawless Hearts, innovation is needed more than imitation. Their dream is to not stay in the past with their music but bring forth together a classic and new age appreciation to make something completely their own. Something wholly satisfying with diversity in styles reminiscent of Bon Jovi, Guns N Roses, Heart, Fleetwood Mac, Foo Fighters, and Tonic. You get an eclectic and awesome sound. After successful stints touring Germany and Holland, and also a notable performance at SXSW 2014, the Jacksonville, FL-based quintet linked up with Pavement Entertainment to release their brand new EP, Creatures of Habit. To showcase the new EP and show audiences the full power of their sound, we are excited to bring you the new video for “Creatures of Habit,” and we are sure you’ll agree that this is just the beginning for Lawless Hearts.

“Creatures of Habit” takes place in a setting that Lawless Hearts is very familiar with; the road. The setting alternates between two motel rooms that even though they are next to one another are on completely opposite ends of the spectrum. It begins in a dingy and dirty room in a nondescript room, but next door the party is raging. As the band makes their way next door the opulence and the vices pile up, with every sort of rock and roll excess finding its way into the scene. Harkening back to all of the classic tour montage videos of the hair-metal era, this video is sure to inspire legions of young fans to pick up an axe, get out on the road and experience the rock and roll life that has cast a spell on generations of music lovers.

It’s always a pleasure to work with the Pavement Entertainment crew to bring you the best in the modern hard rock and metal scene, and they’ve unearthed another gem with Lawless Hearts. We are here to get you whatever you may need to support this band and video, so please don’t hesitate to get in touch with us here at HIP Video Promo. You can reach us at (732)-613-1779, email us at info@HIPVideoPromo.com .