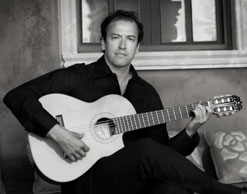 Greetings friends, it’s Andy Gesner from HIP Video Promo, here to share a clip from an accomplished and classically-trained musician, and one reaching mass audiences through his audacious performances and the sheer force of his immense talent. Lawson Rollins has played his stunning Spanish guitar music at the Sydney Opera House, the Kennedy Center in Washington D.C., and England’s prestigious Salisbury Festival. Yet he owes his biggest (and perhaps most enthusiastic) audience to a far more proletarian stage: YouTube. Last year, a minute-and-a-half clip of Rollins in action was posted on the video-sharing service; two and a half million views later, people are still flocking to see “The Fire Cadenza”. Viewers have marveled at the phenomenal dexterity and superhuman fluidity of Rollins’s playing, and they’ve left page after page of stupefied comments on the YouTube site. Many of these enthusiasts clearly know nothing about flamenco or Spanish guitar playing — they’re pop and metal fans attracted by this display of virtuosity and musical intelligence. Others are flamenco enthusiasts, and recognize Lawson Rollins as a master. Rollins isn’t picky, nor is he parochial; he’s a firecely independent artist at heart, he isn’t wedded to any genre or subgenre. Give him eight bars, and he can hold listeners of all ages, backgrounds, and proclivities spellbound. His is an indie success story of the most inspiring kind — a musician of formidable skill who has attracted attention by simply being the best at what he does. No, you won’t hear Rollins’s music on American Top 40 radio, and that’s a shame. Thanks to the Internet, it’s also becoming increasingly irrelevant.

Rollins’s nylon-string guitar playing is often a flash of sonic velocity, a sequined strings of dazzling tones, a collision of influences, a sophisticate’s sugar rush. “The Fire Cadenza” is all of these things. But speed isn’t his only game, and he isn’t limited to Spanish classical techniques: on his albums (and he’s released many), he seamlessly integrates elements from disparate musical traditions. He can be meditative and lyrical, barbed and humorous, ambitious and challenging; his command never flags, and like a finely-tuned automobile, he can take the listener from zero to sixty in a heartbeat. Espirito, his upcoming full-length release, seems certain to extend his legend: it’s a brilliant fusion of flamenco, Latin pop, jazz, samba and salsa, mind-warping raga, sun-baked bossa nova, and exotic Middle Eastern music. Co-produced by accomplished Persian-American musician Shahin Shahidia and featuring guest performances by Brazilian star vocalist Flora Purim and the world-renowned percussionist Airto Morena, Espirito promises to win Rollins plaudits — and new fans — all over the globe.

He’s also poised to extend his spell over his growing Internet audience. “Santa Ana Wind”, his latest posting to YouTube, is even flashier and more expansive than “The Fire Cadenza”: it’s two-plus minutes of hand-claps, flamenco beats, fluid bass, and, of course, electrifying Spanish guitar. And although the song has the easy grace and inevitability of a Spanish classical standard, “Santa Ana Wind” is a Lawson Rollins original. The clip has already drawn hundreds of thousands of viewers; it seems well on its way to matching — and perhaps superseding — its predecessor’s formidable record. It helps that Lawson Rollins is such a thrill to watch: he’s a model of focus and discipline, but it’s equally apparent that he’s enjoying himself. Rick Chapman’s crisply-shot performance clip is more subtle than it initially seems — it begins with a shot of Rollins’s determined eyes, captures the impossible blur of his fingers in motion, and pulls back from time to time to demonstrate the guitarist’s stage charisma and impeccable sense of meter. Few performers in any genre have the audience (or the sheer guts) to sell tablature through iTunes; Rollins has been successful at it, and “Santa Ana Wind” demonstrates why.

We’re very pleased to bring you this must-see video, and are here to hook you up with all things Lawson Rollins! If you need more info, call Andy Gesner at 732-613-1779 or e-mail us at info@HIPVideoPromo.com. You can also visit www.LawsonRollins.comto find out more about Lawson Rollins.