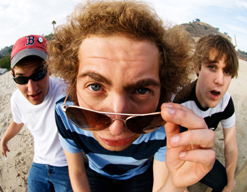 Hey, everybody, it’s Andy Gesner and the staff from HIP Video Promo, here with a brand new clip from an electrifying trio. How do you know if you’re making a positive impression on the punk underground? If the great Ben Weasel adopts you as a favorite band, it’s a pretty solid indication that you’re on to something good. The influential Screeching Weasel frontman has been waving the flag for The Leftovers for a few years now, and for good reason – few bands in America perform energetic, tuneful pop-punk with comparable skill or enthusiasm. And Ben Weasel is hardly alone in his appreciation of the Portland, Maine-based group: relentless trans-continental touring (not to mention charm, talent, and good humor) has won The Leftovers friends wherever punk rock is performed. So much so that Jaret Reddick, the frontman for Bowling For Soup has signed the band up to his imprint, Crappy Records, through the good folks at Oglio Records. Jaret and other Bowling For Soup members appear in the “Telephone Operator” video. Lookout Records chief Larry Livermore is also a fan, and members of The Muffs, The Donnas, and Nerf Herder appear on the trio’s latest release.

And once you hear the aptly-named Eager To Please, the new set, you’ll probably wish you could play with The Leftovers, too. These new recordings sound like they were an absolute hoot to make – and the sense of fun that always surrounds the band is positively infectious. Even mainstream critics have caught the fever: Mark Deming of the All Music Guide recently praised the band’s hot-wire guitars and sharp melodic hooks, and crowed that the group’s untamed energy could “power a fleet of eighteen-wheelers”. On The Move, the ’07 release, earned The Leftovers merited comparisons to The Ramones, The Queers, Green Day, and late-seventies British pub rock heroes like Nick Lowe and Dave Edmunds. In fact, on that set, the band sent a pointed shout out to Elvis Costello’s Get Happy!! – they’ve studied their rock history, and they treat their progenitors with the sort of cheeky reverence you’d expect from a good-natured gang of punks.

It’s Costello’s shadow that graces “Telephone Operator”, the first single from Eager To Please. Fans of the Attractions andMy Aim Is True will find all the components here: the absurdly-catchy melody, the scorching combo organ, the hyperactive and rubbery bass, the stop-start rhythm section, the witty lyrics, and the adenoidal (but oh so winning) vocals of frontman Kurt Baker. Raw enough for the punk clubs but sufficiently tuneful for commercial radio, “Telephone Operator” sounds to us like a legitimate leftfield summertime hit.

The playful clip for “Telephone Operator” suggests that the band is fully conscious that there’s something refreshingly old-fashioned about their straightforward, unpretentious brand of pop-punk. Everybody in the clip has handheld cells with wi-fi – except for Baker, who tries in vain to get through to his girlfriend on a vintage pushbutton phone. The Leftovers singer even wanders into an antique shop and tries his luck with old plastic receivers; meanwhile, his girl and her friend laughs at his feeble attempts to cope with modern telecommunications. This is a pure pop-punk clip, so there’s lots of silly business too: nok-hockey games between the bandmembers, arcades and bars and backyard pools, and the sunny streets of Downtown Portland in the summer. Baker can’t join in on the fun, though: while his friends play, he struggles with his antique phone. The end of the clip doesn’t resolve his frustration, but it does get him wet – he’s tossed into the pool by his pals, bonked over the head with a flotation noodle, and, of course, given a beer!

We’re very excited to have the opportunity to work together with Mark Copeland and the crew at Crappy Records and Oglio Records. If you need more info, call Andy Gesner at 732-613-1779 or email us at info@HIPVideoPromo.com.