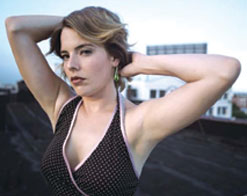 Hey everybody! Its Andy Gesner and the staff from HIP Video Promo here with a video that celebrates an artist who can only be called a songwriter’s songwriter. The smash success of Norah Jones has made the pop underground safe for torch singing and cabaret again – and the best thing about the revival is that so many of the new, young artists working this territory are so interesting and so idiosyncratic. Last year, Nellie MacKaye, Jolie Holland, and Jaymay thrilled fans of contemporary singer-songwriter music with daring, offbeat, and singular takes on Depression-era jazz and chanson. Now, it’s our great pleasure to introduce you to the newest and, we believe, the most accomplished of all of the recent revivalists: the dazzling Sylvie Lewis. The winsome Lewis is a masterful folk-jazz composer with a frank and entertaining lyrical style, and a note-perfect voice that flashes like quicksilver. Already an indie sensation in New York City (Lewis was recently featured on the cover of Downtown hipster magazine The Deli), the singer and composer has recently seen her songs added to jazz and left-of-the-dial pop playlists across the nation.

Tangos & Tantrums, the debut album, is her showcase – and it announces her arrival with fanfare. On twelve terrific tracks, Lewis writes and sings with the assurance of the young Laura Nyro: clever, urbane, occasionally flirty, invariably witty, and never afraid to show warmth and worry. The singer surveys her surroundings with a critical eye, and draws characters with uncommon perception. “All His Exes” exposes the underside of having a “sensitive” boyfriend, “My Rival” illuminates the unspoken aspirations of every sexually precocious teenager, and the altogether brilliant “Promises Of Paris” undresses the romantic illusions of a would-be ladies’ man and knee-jerk Europhile. Lewis has a knack for indelible rhymes and a great feel for the rhythm of words, and a terrific sense of humor that insures that even her most bittersweet narratives go down easy.

“By Heart”, the first single, is one of the sad ones: a straightforward romantic lament, delivered with an aching lilt and a vocal purity rare in any genre. With its rocking-chair backbeat, gently strummed guitar and graceful, inevitable melody, it’s closer to sophisticated country-pop than Thirties jazz; more artful Laura Cantrell than fiery Billie Holliday. A distant, quavering organ in the choruses completes the mood: one of melancholy, resignation, and a quiet, reflective beauty.

Raised in London and educated in Switzerland, Sylvie Lewis’s lyrics – and musical antecedents – nonetheless suggest that her heart belongs to New York City. And while there’s no telling where the indoor clip for “By Heart” was shot, there’s something about the tight, warm, sunlit corner apartment that strongly evokes Gotham. Perhaps it’s the musical instruments, perhaps it’s the bright sky behind the windows, and perhaps it’s just the visible architecture, so characteristic of post-industrial Brooklyn, which orients the viewer. For much of the video, Lewis is alone – shot barefoot, in a dress, looking adorable, vulnerable, and maybe a little wary. But periodically, she is joined by a male accompanist who plays along with her. Yet he fades in and out of the frames, dissipating like a memory whenever the camera lingers on him too long.

We would like to welcome all the cool folks at Cheap Lullaby to the HIP Video family of indie rock champions. We have plenty of copies of Tangos & Tantrums for on-air giveaways, along with posters and ultra chic Sylvie Lewis matchbooks! If you need more info, call Andy Gesner at 732-613-1779 or e-mail us at info@HIPVideoPromo.com. You can also visit www.CheapLullaby.com to find out more about this compelling songstress.