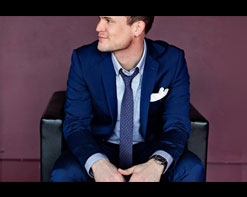 Liam Gerard is a Minneapolis-based singer, songwriter, recording artist and performer. With roots in pop music of the 90’s to his adult addiction with Motown and the blues of Ray Charles. The music has been described as pulsing and melodic, with an attention to reflective lyrics based on experience. Tastes of alternative, blues, folk and pop give the music an eclectic feel as it spans multiple genres. Liam Gerard wrote all 11 tracks on his debut album Belle and Music and funded the entire project without a record contract over the course of 25 months of work recording it. Each song represents a moment/ event in time captured in the mind of a man utterly impassioned by his muse; a woman he refers to as, Belle.

For the visual representation, Gerard has linked up with one of our favorite directors, Justin Staggs. Though most known to our programmers through his work with rock acts like Strike Anywhere and The Melismatics, his skill set transcends genres  and he proves it with beautiful efficiency in these two new videos for “Ice Skating” and “Your Name.”

In “Ice Skating,” Liam brings it back into a modern era with another gorgeous offering. The video begins with Liam entering a dusty room of old pianos. He lifts the cover and sits down to perform a beautiful rendition of a song that is clearly written from the heart and to a very specific person. At his side is this incarnation of Belle, a graceful ballerina performing a dazzling routine that is flawless, seamless, and moves with the grace of a swan. In between these artist moments is the story behind the story of these two struggling to find a common ground and make their relationship. It’s a piece of devastating beauty, and one not to be overlooked for fans of brilliant songwriting and music video production.

For the second clip, “Your Name” taps into the vibe of an older nightlife era. Beautifully shot in a film noir-styled black and white, the video takes place in a small, smoky old club with Liam and a beautiful blonde female as the principle characters. Though they have an existing working relationship, it’s apparent that their personal feelings for one another have made for a complicated situation. It’s a classic take on timeless emotions, and all parties involved execute a near-perfect clip like a modern-day music video Casablanca.

We’re all very excited to be working with Liam Gerard to bring you these two exceptional new videos and to introduce you to an artist with a seemingly endless well of inspiration and talent. We want to hook you up with a copy of Belle and Music as well, so don’t hesitate to get in touch! Please contact Andy Gesner and the HIP Video Promo staff at (732)-613-1779 or email info@HIPVideoPromo.com . You can also visit http://www.LiamGerard.com/ or http://www.Facebook.com/LiamGerard/.