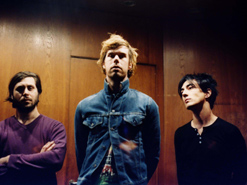 A warm autumn greeting to all of my cherished programmers! It’s Andy Gesner and the staff from HIP, here with another clip from one of the underground’s most compelling experimental rock bands. You never know what to expect next from the Liars, and that’s half of what makes them so essential. The other half is their astonishing talent, musical courage, and songwriting smarts. The Liars’ transformation from a “hipster-fave” dance-rock band to conceptual-musical artists to sonic adventurers has been much-chronicled.

Liars, their latest, was immediately embraced by critics and audiences. Jess Harvell at Pitchfork praised it as “the kind of riffs and howling keyboards that go right for the American rock fan’s lizard brain”; Heather Phares at the All-Music Guide called Liars the group’s “most entertaining album yet”, and raved about its focus and impact. The early word on the album was that it was poppier and more immediate than their other releases – but wild, far-out tracks like “Leather Prowler”, “Pure Unevil”, and the Daydream Nation-like “What Would They Know” prove that the Liars are as uncompromising as they’ve ever been. Angus Andrew, Aaron Hemphill, and Julian Gross color these songs with metallic guitar and squealing synthesizers, cold reverb, vocal effects and strange sonic textures, crazy rhythms and stuttering, growling bass.

That said, the lead singles from Liars might be the most approachable things that the band has ever done – catchy and immediate enough to endear this gang of sonic explorers to a mainstream indie-rock audience. It’s particularly true of “House Clouds”, which snakes along on an insidious synth riff and an engaging performance by Andrew. Sonny Gerasimowicz’s playful clip for “House Clouds” further portrays the Liars as a band you wouldn’t mind having over for dinner. They may howl and clatter on record, but as the video shows, these fierce rockers also at home with puppies and kittens.

Yes, it’s true; Andrew sings most of “House Clouds” to a little grey cat. He cups the tiny, fuzzy animal in his hand and croons straight into its pointy ear. The other two members of Liars get comfortable with their animal familiars, too – a puppy, and a striped-red feline. But lest you think that this is a Hallmark-card of a video, rest assured, it’s plenty weird, too. The “House Clouds” clip opens with a shirtless Andrew (sporting a LA gold chain) standing behind Hemphill and Gross, both of whom look uncomfortable in business suits. When he isn’t purring to his kitten, the Liars frontman writhes on the ground and stares confrontationally at the camera. Moreover, the words he sings to the cat aren’t exactly comforting. Perhaps there’s a good reason that the adorable little animal bats back at his face with her paws!

We know that Mute always brings us the coolest new vids and this time is no different. Huge props to both Mark and Stephanie for bringing us on board to once again be a part of the Liars promotional team. We’ve got copies of Liarsavailable for your on-air giveaway needs to please be in touch to get your hands on some. If you need more info, call Andy Gesner at 732-613-1779 or e-mail us at info@HIPVideoPromo.com . You can also visit www.Mute.com, or www.LiarsLiarsLiars.comto find out more about Liars.