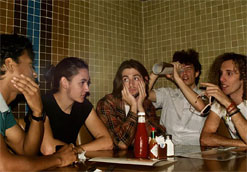 This year marks the birth of Liily and the resurrection of feverish chaotic hard rock. Calling back to the 90s, their sonic rush channels a raw passionate fire that feels familiar but also different, with edges uncut. They have created a positive space for their generation in a time that feels bankrupted. Their oldest member is only 19 years old and they already come across like anti-rock stars. Coming out swinging, their lyrical content is riddled with restlessness bound to knock one out. Reborn and remastered, rock’s golden age will no longer be a distant diamond in the rough.

Liily rose from Los Angeles but didn’t let their indie-centric culture sway them from their truth. The band is composed of five members including Maxx Morando on drums, Sam De La Torre on guitar, Charlie Anastasis on bass, Aaron Reeves on guitar, and Dylan on lead vocals. On the edges of the Inland Empire in the San Fernando Valley, they have managed to create a sound that carries the integrity of art and creative expression. They have been experimenting for a few years but this summer they released their first single, “Toro”, and it has already gained traction from true music lovers. This back and forth affair has brought out their pent-up energies, calling to mind the likes of early Foo Fighters and Rage Against the Machine. Their debut EP is set to be released this fall entitled Toro as well. With the narrator of the records plagued by seemingly unquenchable thirst, their manic intensity rains down and replenishes a dead genre that no longer seeks slumber.

For their first grandiose entrance, Liily invites the audience to dance with the devil in their new music video for “Toro.” With intentionally blurry shots, fast-paced transitions, and contagious head banging, their frustration shifts to liberation. This jagged stimulus is fiery and melodic, further intriguing the listener to enter into their stratosphere. With a great sense of humor, they run away from the bull that has escaped from their minds as it molds into a physical embodiment of their fears. The video closes and they are not able to face their demons, masking themselves from who they really are and ultimately allowing themselves to fall full force into nothingness.

We’re honored to be working with Liily, and we hope you embrace the new clip for “Toro”. We’d love to see this video added into your cherished programming and online presentations in a timely fashion! Rest assured we’ll have plenty of Liily merch available for on-air contests and giveaways so don’t hesitate to get in touch. For more information on Liily please contact Andy Gesner and the HIP Video Promo team at (732)-613-1779 or email us at info@HIPVideoPromo.com. You can also check out www.instagram.com/liilytheband and www.facebook.com/liilytheband for recent updates on Lilly and visit www.liilytheband.com for more on the next big rock band of this generation.