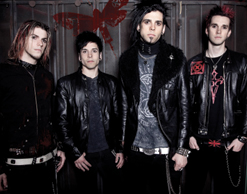 Hey, everybody, it’s Andy Gesner and the staff from HIP Video Promo, here to call your attention to a devilishly entertaining clip from a new group with an international pedigree. The members of Like A Storm boast some interesting stamps on their passports – formed in New Zealand, the aptly-named quartet blossomed after a transplant to Vancouver, Canada. The minute they begin to play, however, their place of origin becomes irrelevant: anywhere on the globe, any fan of heavy rock is bound to respond to the band’s piledriver beats, buzzsaw guitar, and powerful, melodic vocals. Likewise, the beautifully-shot clip for their first single, “Chemical Infatuation”, is bound to resonate for anybody with a taste for psychological horror and supernatural drama. It’s a cinematic thriller condensed into a three-and-a-half minute clip – full of sex, violence, fragile beauty, and mad science of the demonic kind!

And because we don’t want you to miss a bit of the narrative that Like A Storm has constructed for their fans, we’re including the director’s cut on this reel. It barely differs from the official version of the video, but it adds a few crucial scenes that elaborate the tale more fully. During these moments, the music stops cold – and the existential horror of the clip takes over completely. When the band plays, they do so in a creepy, low-roofed attic in the haunted house inhabited by their characters; such is the force of their performance that it appears that the entire structure is shaking.

Fans of Like A Storm have become accustomed to drama. Their live performances are thrillingly intense: the band can go from an intimate whisper to a murderous howl within seconds. That unerring feel for dynamics that has been captured onThe End Of The Beginning, the band’s ambitious debut. Produced by Mike Plotnikoff (Buckcherry, My Chemical Romance, Three Days Grace) with an assist from former Yes synth player Igor Khoroshev, The End Of The Beginning firmly establishes what Western Canadians already know: Like A Storm is one of the most creative and challenging hard rock bands in the world. This summer, they’ll be demonstrating their potency in clubs across America – and, no doubt, conquering another nation in the process.

The “Chemical Infatuation” drops shortly before the tour begins, and we think it’s a solid bet that the clip will become famous in America even before the band does. It’s the harrowing story of a young man so obsessed with the girls around him that he bottles them – literally. We’re not shown anything too gruesome, but it’s made clear that he’s a killer; not knowing how to seduce women on his own, he carries them back to his laboratory and distills their essences into potions. Each of these elixirs has the power to generate a hallucination in which the girl comes to life – and he makes love to them in his chemically-induced reveries. A meticulous archivist, each bottle is beautifully labeled (in cursive!) with a different woman’s name. The infernal machinery in his laboratory, too, is eerily radiant; it’s strange and twisted, sure, but it’s also lovingly-assembled. The main character is crazed, but he’s intelligent; conscious of what he’s doing, he chooses to overdose on his own illicit creations. The poisoned turn on the poisoner, and by the end of the clip, the women have had their revenge – if only in fantasies!

Many thanks to Deborah Klein and Brian Simpson at Prospect Park Records for bringing us on board to promote Like A Storm. If you need more info call Andy Gesner at 732-613-1779 or e-mail us at info@HIPVideoPromo.com. You can also visit  www.LikeAStorm.com to find out more about Like A Storm.