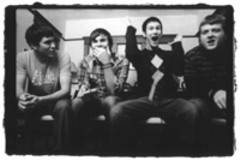 Hey everyone! It’s Andy Gesner and the staff here at HIP Video HQ launching another awesome music video campaign with our friends from Doghouse Records! Doghouse has had quite a string of success stories in 2003, including The All-American Rejects, Sunday Driver and recent favorites Celebrity. With an uncanny ability to spot and sign “next big things”, Doghouse is unafraid to champion artists that persevere “outside the box” and eschew being labeled. Enter Limbeck. A roller coaster ride of feel-good Americana, fresh faced ebullience and an uncontrollable urge to rock.

When I first heard Limbeck’s “Julia”, I thought I was listening to some long-lost Nick Lowe track; complete with jangly Telecasters playing smart chords and crisp, trebly leads, enthusiastic tenor lead vocals and a hook laden arrangement (And I should point out that I LOVE Nick Lowe, so this is quite a compliment). There’s a difference here, however. Nick’s sensibility is often wry, sometimes cynical, and occasionally dark. Limbeck’s Robb McClean is bright, cheery, and wide-eyed. It’s been said that with age people slip in to two classes, those who have seen much of the world, and those who have seen too much. Limbeck can’t wait to see more.

Visually, the clip has the grainy, handheld look of the Super 8 home movies of years gone by, but it’s artfully put together in multiple windows to give the impression of a photo album from a fondly remembered road trip. Indeed, like “Julia”, much of Limbeck’s second CD Hi. Everything’s Great, from our pals at Doghouse Records, is great road music. Producer Ed Rose (The Get Up Kids, Motion City Soundtrack) has obviously encouraged the band to let the experience gleaned from time on the road shine through in a very effective way.

Limbeck is: Robb McClean (vocals, guitar) , Patrick Carrie (guitar, backing vocals) Justin Entsminger (bass), and Matt Stephens (drums). Hi, Everything’s Great is their second album, and a real change of pace from their first, 2001’s This Chapter is Called Titles. They branch out in the instruments employed, adding such novelties as banjo, lap steel and Hammond organ on various songs. Under the astute guidance of Rose, the quality of instruments varies as well. Drummer Matt Stephens explains: “About half the stuff I used was just the kind of stuff you’d find at a garage sale but it just happened to work for that song.” Carrying over from the first album, however, is the band’s exuberance, honesty, and love for Cheap Trick-style sing-a-longs. For info about the Limbeck programmers contest, contact 732-613-1779 or e-mail info@HIPVideoPromo.com. Here at HIP Video we want to make sure all your Limbeck needs are met!

You can download the “Julia” MP3 from Doghouse Records