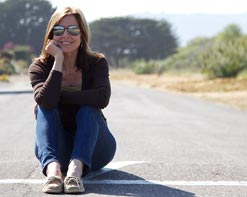 True to the title of her latest full-length independent recording, San Francisco-based singer-songwriter Liz Kennedy faced many a Speed Bump – both creatively and emotionally – on the road to her exciting emergence in 2006 with her debut album Clean White Shirt. Battling confidence issues and facing the daunting idea of establishing a fan base in her ‘50s, her deepest soul-searching involved a positive response to a question that would change her life. What would happen if she didn’t give herself a shot?

It’s been said that most people go to their graves with their best music still inside of them. Thankfully Kennedy is in the enviable position of having the sage wisdom and life experience to delve into the deepest darkest chasms of her soul and share with us her innermost thoughts and secrets. Now at the age of 62, her voice has never been stronger, and in her new video “How Was Your Life”, she tackles the conundrum of wondering what the life path of a significant other from 30 years ago was like.

Influenced by legendary artists like Bonnie Raitt, Paul Simon, Randy Newman and Carole King, Kennedy puts the unique, inviting stamp of her sandpaper and honey-tinged vocals on Speed Bump’s 14 dynamic folk/blues influenced pop/rock tracks. From the high-flying gospel/blues-driven opening title track through the whimsical, horn-fired closing track expressing her long held desire to write “A Hit Song,” Kennedy tells cleverly-spun, deeply-lived stories about experiences that might not have surfaced in her younger days. Perhaps no song is more intimate and touching than “How Was Your Life?” which has a music video created with the ultimate personal touch.

The video opens with this message “In 1929 my grandmother purchased a 16mm Kodak Model K movie camera. She filmed her life until 1948, then gave it to my mother who filmed hers until 1965.” What follows is a touching collection of Kennedy family footage that spans 4 decades of some of America’s finest years, and a near perfect stroll down memory lane. The 16mm collection shows the family at home, on vacation, and spending time on Main Street, USA. It’s a beautiful piece of cinema that gives us not just a personal glimpse into the generations of family that helped shaped Liz Kennedy and the woman she had become but also a connection to a more innocent and simpler time of youthful exuberance.

We are delighted to be working with such a talented and honest artist like Liz Kennedy and we are confident that you and your viewers will embrace her. Please contact Andy Gesner and the HIP Video Promo staff at (732)-613-1779 or email us at info@HIPVideoPromo.com for more info on Liz Kennedy.