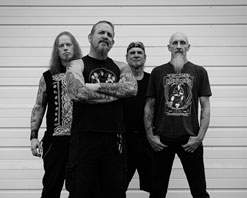 Long Claw rose from the ashes and brushed themselves off in the only way they know how- in a complete and utter tribute to rock and roll and metal. This band of champions is not afraid to take the lead as they guide their following into clarity in the form of a riot. This complete uproar refuses to be ignored as they are not afraid to offend or even scare. They fight injustice and oligarchy by validating their own struggle as small folk while also not accepting their place within the social construct. As martyrs for the cause, they act as enlightened prophets increasing with shock and intensity within each transition.

Atlanta-based Long Claw is composed of Will Price on bass guitar and lead voice; Sean Briney Martin is on guitars and voice; Danny Long on guitars; and Detlef von Kalben on the drums and percussion. With a supreme amount of power and talent, it is no wonder why they have placed themselves above the law. Currently signed to Pavement Entertainment, this isn’t their first revolution. Price was in BOILER (Mayhem/Atlantic) and founded MuckRaker (Eternal Sound). Long was the former guitarist and songwriter for Season Of Sorrow. Von Kalben has been in several prominent Atlanta bands, including Snow White. And Martin is the former guitar slinger for Nectar and Atomizer.

Long Claw has released one studio album entitled, Disastrophe, and are planning other projects as well. Forming in 2016, they have released a variety of singles that range from hard metal to soft reflective lines to just straight up foot-stompin’ metal. The band has produced a variety of music videos with Price in the editor’s and director’s chair. In “March Of The Trolls”, they call internet trolls “fat and lazy”. They tune it down for their latest release, “Razor Blade Tears”, which nods to Black Sabbath’s “Solitude”. The video opens up with a cutoff black and white shot of the band as it transitions back to Price’s performance. As it fades and progresses, the scene is painted without colors as they introspectively think about their journey through life in the face of disaster. Going through divorce with a rock and roll spin, they embrace their eternal calm as the video fades and questions remain unanswered with one last shout, “My love, my everything, I pissed away.”

We can’t wait to see how Long Claw will remain victorious in their rain that not only pours but soars, and we’re elated to promote their latest installment, the “Razor Blade Tears” music video! We hope you embrace this clip as much as we have and consider including it in your regular programming and online presentations. Rest assured we’ll have plenty of Long Claw merch available for on-air contests and giveaways so don’t hesitate to get in touch. For more information on Long Claw, please contact Andy Gesner and the HIP Video Promo team at (732)-613-1779 or email us at info@HIPVideoPromo.com. For recent updates on Long Claw check out www.facebook.com/LongClawMetal.