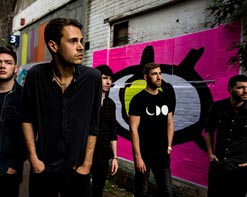 The epic sound of Longfellow is at once sweet, sad, and soaring–a cinematic rush of emotions that hits you directly from the first listen. It’s no wonder that these five lads from South London have been on a hot streak since their very first performance back in the Summer of 2013, having since performed as direct support for Keane’s 10th Anniversary Show, embarked on a tour across the UK with the legendary Hall and Oates, and received lots of love and airplay on BBC Radio. As the band continues its stateside push with two upcoming showcases at the CMJ Music Festival later this month, HIP Video Promo is very proud to present the excellent clip for their latest single, “Kiss-Hug-Make Up.”

Tapping into the very powerful territory of stadium-sized giants like U2, Coldplay, and Keane, Longfellow deliver a piano-driven, emotionally-charged ballad with “Kiss-Hug-Make Up” that shimmers, sparkles and shines with an irresistibly surefooted stance. As the band beautifully builds and crashes behind him, Singer Owen Lloyd imbues each lyric with an earnest, heartfelt quality that reaches through his smooth baritone and tugs at the heartstrings. He pleads with his lover “don’t make these blue skies turn red / ’cause I’m yours and I won’t regret it”. And we can’t help but believe every word.

The video–directed by Guy Davies–is a gorgeous mix of live performance footage and a compelling series of dramatic vignettes. The band–perfectly lit in the smokey blue glow of an empty auditorium–performs with a bottled-up intensity befitting of the track’s desperation and triumph. As Lloyd sings to a lost lover for her return, we see a series of couples in different settings, but there’s an interesting twist: between cuts, the men are suddenly with different women, and vice versa. Despite it’s portrayal of the impermanence of romantic relationships, we still stand with Longfellow as they fight for true love.

For more information on this exciting band, their powerful new clip for “Kiss-Hug-Make Up”, or their upcoming CMJ showcases at Rough Trade on 10/21 and Coco 66 on 10/24, please contact Andy Gesner at (732) 613-1779 or e-mail the HIP Video Promo staff at info@HIPVideoPromo.com . You can also visit www.OohLaLaRecordings.com or www.Longfellow-Music.com for more info on Longfellow.