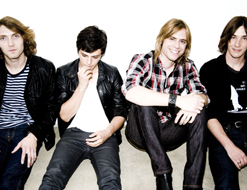 Hello video comrades! It’s Andy Gesner and the tireless staff from HIP Video Promo, here to provide you and yours some clear California sunshine as we wait out this cold, winter season. We’ve recently sent you an excellent Loomis & The Lust video ID that we hope you’ll use in your programming in tandem with the “Bright Red Chords” music video. Santa Barbara is one of the most beautiful cities in America: a red-roofed mirage tucked into a picturesque bend in the Pacific coast. It’s a land of youth, charm, sand, surf, and bright light, and for many, it exemplifies Golden State culture at its best. You’d expect a band from Santa Barbara to sound exactly like Loomis & the Lust – their glorious, sunny guitar-pop, their irresistible hooks, their optimism and joyous grooves all seem like perfect expressions of the city they call home. Nagasha, their debut EP, showcases the quartet’s Pacific-warm sound, infectious melodies, and tight vocal harmonies; spin it once, and you’re guaranteed never to forget the songs.

The rare pop band that legitimately doubles as a dance act, Loomis & The Lust makes recordings that feel like the soundtrack to the best party you never attended. They’re already widely celebrated by SoCali music aficionados, and local webloggers and critics have stopped shaking it long enough to pen some high praise for the group. In a review that calls them out for their “catchy tunes and cool vibes”, the Santa Barbara Independent praises frontman Will Loomis’s soulful voice and the galvanizing energy of his bandmates. They’re regulars on the hottest Golden State stages, and this summer, in support of Nagasha, they’ll be bringing the celebration to festivals and clubs all across the United States.

And what are they celebrating? Among other transcendent things, they’re enraptured by music itself. The four members of Loomis & the Lust are pop lovers, radio listeners, and record collectors, and they know their rock history; better yet, they’re committed to spinning those classic songs on vinyl. “Bright Red Chords”, the debut single from the Nagasha EP, extols the glories (and the healing power!) of the LP and the 45 record, and Loomis and the band sing it with the passion of true believers. Produced by Brandon Mason (David Bowie, Secret Machines), “Bright Red Chords” is a sunny, immediate, dazzling pop singalong that wouldn’t sound out of place on a hit radio playlist – or streaming from the speakers of an old record player at a backyard cookout.

Will Loomis and his bandmates look the part of Southern California pop stars, too: in their motor-friendly clip, they’re videogenic, charismatic, and approachable in a surfer-boy-next-door sort of way. Director Dustin Bowser dresses the band in red, and has stashed them in an old, beat-up touring van; they cruise the West Coast highways under glorious summer sun, playing and singing “Bright Red Chords” as they go. But Loomis & The Lust aren’t just out on a joyride – they’ve got big red boxes in the back of the van, and they’re delivering their booty to their neighbors. They toss the boxes over hedges, they ring doorbells and hand them to housewives and kids, they deposit them on stoops and in the middle of the highway. Everybody who engages with these “red chords” (sound it out!) is excited and ennobled; a senior citizen, for instance, is transformed into a beauty queen. Now, eventually the van breaks down, as all band vans inevitably do. But Loomis & The Lust haven’t been forgotten by the folks they’ve delivered the goods to. By the end of the clip, their new friends have returned the favor – and the group drives away in a brand new, bright red mini-tourbus.

It’s a real pleasure for us to have the opportunity to work with Jimmy Cantillon and the Loomis & The Lust crew to bring you this dynamic new clip. If you need more info, call Andy Gesner at 732-613-1779 or e-mail us at info@HIPVideoPromo.com. You can also visit www.LoomisandtheLust.com to find out more about Loomis & The Lust.