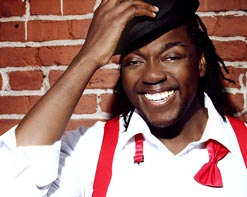 With a voice that blends the soul of R&B, the versatility of Jazz, and the power of Gospel, Loren Smith has become one of the hottest voices in the business. Often called the Luther Vandross of the next generation, Smith has brought down the house to over hundreds of audiences across the US, Canada and overseas, making thousands of fans along the way. Having previously released the inspirational album Love Lifted Me, Smith is now poised to break through to a wider audience with his brand new single “Break Free”. Produced by K-Kov (of Israel’s The Voice) and Josh Stevens (Lil Jon, LMFAO), “Break Free” is a clean, crisp and powerful pop-soul track elevated to wondrous heights by Smith’s effortlessly commanding vocal performance and natural charm. HIP Video Promo is very pleased to present the fun and infectious clip for “Break Free.”

Starting with the evocative pulse of a synth groove, a steady beat drops and Smith’s smooth and stunning vocals take center stage from the jump, as he delivers a simple message of hope that speaks to everyone. “Life can be difficult, unbearable…” he sings. But he reminds us that when we’re feeling down and out, we should remember that the path to a better day often comes down to a choice we all can make. “You gotta break free / free from worry / free from sorrow / free from heartache.” As the tight production soars behind him with bass, guitar, brass and keys, Smith’s winning melody lifts you up and makes you a believer. Every note he sings resonates, and his hook-laden performance is sure to get stuck firmly in your head.

The video for “Break Free” is a beautiful, high-def clip, loaded with imagery as clean and crisp as the music behind it. Comprised of a mix of performance shots of Smith and his band interspersed with scenes from the lives of various characters representing the arc of his lyric. We see people lost, consumed by everyday doldrums. There’s the frustrated police officer stuck behind a desk. There’s the bored clerk bagging groceries. There’s the waitress fed up with her obnoxious table. As the song progresses, each character eventually breaks free of their own funk and chooses instead to seize the day. The director wisely decided against any location shots and instead filmed everyone in a studio against a solid white background. This simple effect makes the colors in every shot pop right along with the music. The combination will leave you coming back for more. In the final shot, when the cast joins the band for a dance party celebration, the feeling is truly infectious.

For more information on Loren Smith and his fantastic new video for “Break Free”, please call Andy at (732) 613-1779, or e-mail the HIP Video Promo staff at info@HIPVideoPromo.com for more info on Loren Smith.