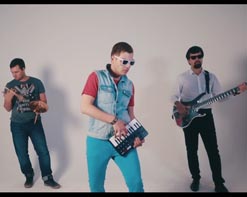 Losos is an electro-pop act from Moscow. If you think that cutting edge, contemporary music doesn’t come from places like Moscow or the Russian Federation, then clearly you haven’t been paying attention. This year alone we’ve brought you incredibly engaging clips from Russian artists like On-The-Go, Glintshake, and Riff Action Family. And while all of these artists have all represented some piece of the rock genre, Losos is the first Russian artist we’ve brought that has firmly entrenched itself in the electronic and pop world.

The new single “Nobody’s Feelings” is a pure joy to listen to and approaches electro-pop with a slightly different tilt. While most artists in the genre rely completely on brief blasts of bass looped over and over, “Nobody’s Feelings” is built on a foundation of a funky bass line that slinks through the song like an anaconda on the prowl. Once the rhythm section is established it’s time to build all of the fun synthesizers and vocals on top of that foundation. The choruses open up to a breakdown beat underneath the vocals singing about a complicated relationship and emotional highs and lows each side experiences when love is no longer an option. The song is propulsive and grooving, but keeps a slightly somber feeling throughout. All of this creates a song that will surely tug on your emotions.

The video for “Nobody’s Feelings” pulls the multiple moods of the song and wraps them all up into a highly effective clip. It begins with a minimalist shot of Losos in front of a white background. The instrumentation consists of little more than a bass, a small cymbal and drum stick, and a handheld AKAI midi keyboard. Once the song picks up the narrative begins with a group of gorgeous women in a dark room all clamoring for a lollipop offered up from a mysterious character. Once these lollipops are unwrapped the party gets bumping. Good times are being had until he realizes he has created an aggressive band of robotic addicts. Their glowing eyes and fiery pink hair is a creepy and ominous visual, and we’re not sure of their intent for him. We won’t give away any spoilers, but let’s just say it’s ELECTRIC!

We are incredibly excited to be working with Losos to bring you the new “Nobody’s Feelings” video and we hope you embrace it like we have! We are here to do whatever we can to get this video into your programming so don’t be shy to let us know what it would take! Contact Andy Gesner and the HIP Video Promo crew at (723)-613-1779 or email us at info@HIPVideoPromo.com for more info on Losos.