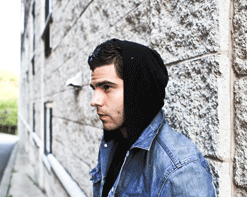 When NJ native Sean Sackmann set out to create Lost Hearts, he know that he wanted it to be different than the “new era” of hip-hop artists that have defined the scene in recent years. Too many artists get into the game because they want that name recognition and easy fame, not because they love what they do the art that they create. Lost Hearts is a project that takes just as much pride in the work ethic and craft of the songwriting, as in the experience of actually sitting back, popping the head phones on, and letting the music take you away.

Sean is no stranger to the hate bred from chasing your dreams, and he takes pride in staying true to himself at all cost. He knew that by following his dreams, his soul, and his voice, he will become a “lost heart” to those around him, but it’s all worth it in the end. He channels this attitude into his music, creating catchy, melody driven tracks and the punch lines to go with it. The response has been stellar thus far, with fans eating up his iHeart Wednesday series, where a new video/lyric video is released every Wednesday. It’s becoming a regular destination and is just a sign of bigger things to come.

When it comes to the new single “Late Night Love Affair”, Sean knew that he would want to find an undeniable foundation, and tapping Chris Isaak’s “Wicked Game” turns out to be the perfect move. It’s only appropriate that the video itself is a sort of wicked game as well.

The video starts out with Sean making his way in a post-society world, where it’s clear that things aren’t what they once were and danger is lurking around every corner. He dodges aggressors in hazmat suits and finds himself coming upon a woman sprawled on the ground. As she is about to be taken away by her would-be captors, Sean springs into action to save her and the two make a run for it. As they run Sean is haunted by visions of other women from his past, and it only fuels his determination to do the right thing and save his new accomplice. The action all comes to a head with a bit of twist, but we don’t want to give away the ending, so check it out yourself!

We’re very pleased to be working with Sean Sackmann on the Lost Hearts project. We’re here to hook you up with anything you may need to get the video into your programming, so please be in touch! If you need more info on Lost Hearts, please contact Andy Gesner and the HIP Video Promo staff at (732)-613-1779 or email us at info@HIPVideoPromo.com .