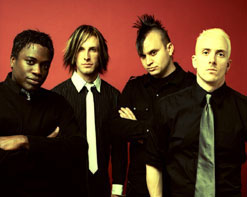 Hello to all of my good friends! It’s Andy Gesner and the staff from HIP Video Promo with another rockin’ video for you! We’re thrilled to be working with our friends at Fat Wreck Chords to bring you the latest and freshest punk rock videos made anywhere. We’ve always counted on Fat Mike, Brian, and the rest of the crew at the label to know more about contemporary punk rock than anybody else – and we know from long experience that the records they put out are bound to resonate with thousands of kids around the world. They’ve got the track record to prove it.

And now they’ve got Love Equals Death – one of the most interesting bands to emerge from the Bay Area punk scene in years. The quartet specializes in a fusion of Misfits-inspired horrorcore, current dance-rock, and Eighties new wave; the subject matter is dark, the performances are raw and furious, but the sounds are often bright and modern. Frontman Chon is an enormous, charismatic presence on the microphone, singing stories of romance, terror, and desecration in a disquietingly smooth voice. Even when he’s shouting at the top of his lungs, he always seems to maintain his equilibrium.

Nightmerica, the debut release, is a wicked and often frightening collection of adventurous modern punk songs, with a flair comparable to AFI. Produced by Bill Stevenson — who has worked with many Fat Wreck Chords artists, including NOFX and Good Riddance – Nightmerica captures the fury, fire, and strange poise of the Love Equals Death stage show. And make no mistake: the live Love Equals Death experience may not be quite as chaotic as what you’ve come to expect from other punk group, but the band has achieved its own singular intensity. The quartet has toured with Pennywise, No Use For A Name, and the Suicide Machines and have shared stages with The Distillers and TSOL – so even if L.E.D. bassist Dominic Davi hadn’t been a founding member of Tsunami Bomb, Love Equals Death’s punk credentials would be unquestioned.

“Pray For Me” is the energetic lead single from Nightmerica: a wild entreaty, supported by harsh, elegant playing by the band. The “Pray For Me” clip – boldly directed by Eliot Rausch of Hardline Entertainment – finds the band in a velvet-curtained club, performing in front of a stylish, seated crowd. This is recognizably a punk group, but they’re dressed in sharp suits and ties; Chon, in particular, looks fantastically groomed and attired. The audience members, too, combine punk chic (nose rings and tattoos) with threads and makeup that might have borrowed from a film set in the Forties. Awash in vibrant reds, concrete greys, deep blacks, and the luminous off-white of a parking garage, the “Pray For Me” video looks every bit as stylish as the band sounds. Straddling the line between brooding romanticism and punk abandon with consummate skill, Chon commands the camera’s attention, filling every frame with his galvanizing presence.

We are ecstatic to bring you this amazing clip from another one of Fat Wreck’s finest! We have plenty of copies ofNightmerica, so please get in touch if you love this band like we do! If you need more info call Andy Gesner at 732-613-1779, or email info@HIPVideoPromo.com. You can also visit www.FatWreckChords.com or www.LoveEqualsDeath.com to find out more about Love Equals Death.